We’re also committed to being a great member of the northeast Nebraska community, including our hometown of West Point, in the heart of  ‘Cattle Country!’

107.9  ‘The Bulls’ Country  music is a blend of  The 90’s through Today, focusing on a modern-yet-traditional Country sound that you asked for.

The Bull also is proud to be a patriotic, All-American , ‘Red-White-and-Blue Country  Station.

Weekdays from 6AM until 12 Noon, Doug Anderson hosts ‘The Morning Stampede on ‘The Bull.”

840 KTIC and 107.9’s News Director Rick Vincent anchors our local news at the top and bottom of the hour, along with ‘ABC World News Minutes” at the top of every hour.

Chad Moyer and the Rural Radio Network anchors update you each hour on  market and agriculture business news. Doug and our Weather-Eye meteorologists update you all morning with northeast Nebraska ‘Bull’s-Eye Weather’ forecasts.

From 9AM until 10  Monday through Friday, Doug hosts a special hour of Country hits from the 90’s.

‘The 90’s at 9” features artists from Country Music’s hottest decade. Hear Garth Brooks, Alan Jackson, Reba, Brooks and Dunn, Shania Twain…and even some great songs from The 90’s you haven’t heard in awhile.

The Bull’s  ‘Fun &  Games Department” has contests and prize giveaways such as ‘The Thursday Doughnut Blitz,” More Meat Mondays and Initial Response” weekdays at 7:50AM as your initials could mean CASH for you.

Start your weekday with Doug, Rick and Chad during  ‘The Morning Stampede!”

‘J.D. During the Workday”

J.D. checks local ‘Birthdays and Anniversaries” around 3:15PM each weekday…along with local and area special events, and Country Music News.

Chad Moyer and the Rural Radio Network update you on business and agriculture.

Give us just 60 seconds for “ ABC News Minutes” at the top of each hour, and we’ll   give you the worlds’ biggest stories.

107.9 ‘The Bull’  IS ‘….Your Official Listen-At-Work  Station,’ with J.D. playing your favorite Country music . It helps make your work-day even better!

The Bull at Night”

The only time we hit the ‘Pause Button” on ‘Nebraska’s BEST Country” —is for northeast Nebraska high school sports.

Start your day with ‘The Morning Stampede,’ and wrap it up during ‘The Bull at Night with Kevin Cooper’… on West Point’s 107.9 ‘The Bull!”

If you simply can’t sleep or you’re at work…or on the road, we have a good suggestion:

Spend Midnight to 6AM  listening to  ‘The All-Night Bull-Ride!”

We feature ‘MAXIMUM-Music Hours,” filled with the best variety of Country music from the  80’s…90’s and Today—with LESS talk!

Of course—we have top-of-the-hour ABC News Minutes and local ‘Bull’s-Eye Weather’ updates every hour. ‘Nebraska’s BEST Country’ IS 107.9 The Bull—all day, and all night!

‘Saturdays  on The Bull”

Saturdays are filled with ‘Nebraska’s BEST Country” on 107.9 The Bull.

Many Saturdays through the school year, Tom McMahon will cover area high school games…and then  we’ll get you back to ‘Nebraska’s BEST Country” on 107.9 FM.

‘Sundays on The Bull”

Spend Sunday with 107.9 The Bull, as we play  MORE of ‘Nebraska’s BEST Country!”

We’ll keep you in touch with world news from ABC at the top of each hour—along with ‘Bull’s-Eye Weather” updates.

Then…leave your radio on 107.9FM to start your Monday with northeast Nebraska’s NEW #1 Choice…107.9FM The Bull! 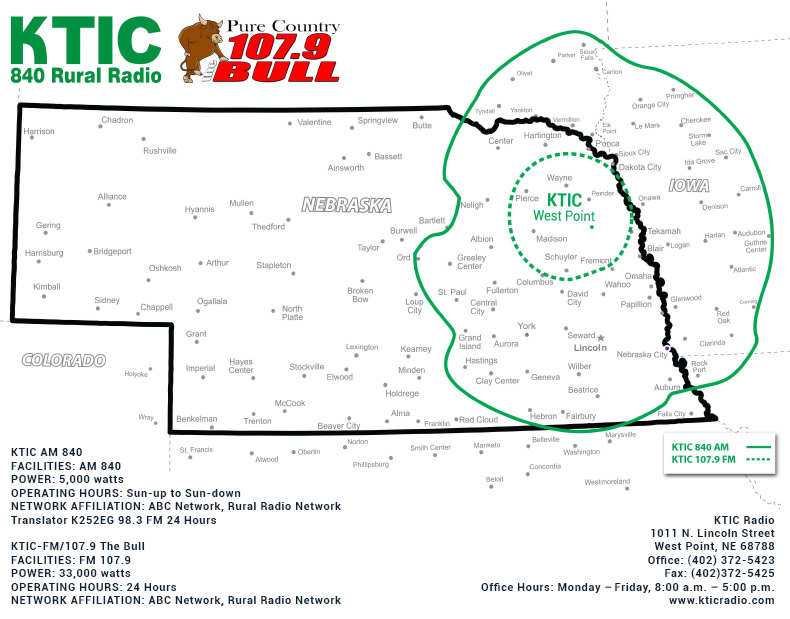