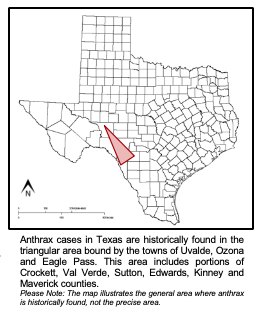 The first anthrax case of the year was confirmed in one captive antelope on a premises in Uvalde County on June 19, 2019.

“The premises is located within the triangular area of Texas where anthrax is historically found in the soil,” said Dr. Susan Rollo, State Epidemiologist. “There is an effective anthrax vaccine available for use in susceptible livestock in high risk areas. We encourage you to consult with your local veterinary practitioner.”

Anthrax is a bacterial disease caused by Bacillus anthracis, which is a naturally occurring organism with worldwide distribution, including certain parts of Texas. The bacteria can surface, contaminating soil and grass after periods of wet, cool weather, followed by hot, dry conditions. During these conditions, animals ingest the anthrax bacteria when they consume contaminated grass and hay, or by inhaling the spores. Outbreaks will usually end when cooler weather arrives.

Acute fever followed by rapid death with bleeding from body openings are common signs of anthrax in livestock. Carcasses may also appear bloated and decompose quickly. Livestock or animals displaying symptoms consistent with anthrax should be reported to a private veterinary practitioner or a TAHC official.

Producers are encouraged to follow basic sanitation precautions when handling affected livestock or carcasses. It is recommended to wear protective gloves, long sleeve shirts and to wash thoroughly afterward to prevent accidental spread of the bacteria to people.