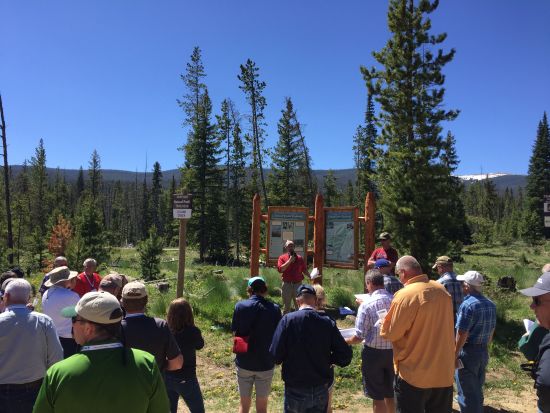 The tour began on Tuesday and focused on the Front Range area before heading into the interior of the Rocky Mountains for the remaining two days.

Day 1: Stops included the Kassler Center in Littleton, where Denver Water operates and is headquartered. Denver Water has the challenge everyday of supplying water to 1.4 million people. Youth Education Program Manager Matthew Bond said it’s a challenge because 80% of people that live in Colorado live on the east side of the Continental Divide while 80% of the water in CO is on the west side of the divide.

Bond explained how Denver Water works hand in hand with surrounding states, in particular with Nebraska…

The stop also included a trip to the Strontia Springs Reservoir where water from the South Platte River is gathered and stored. The second stop of day one included a visit to the Coors Brewery in Golden.

Day 2: A trip to U.S. National Experimental Forest in Fraser kicked off the second day. In operation since 1937, the 32 square mile forest studies the relationship between forest management and water yield in the subalpine zone.

Watershed Researcher Dr. Chuck Rhoades said that 60-70% of precipitation in the forest is snow. He explained the water impact to surround states from the forest…

Pine Beetle infestation was evident throughout the forest as dead trees littered the mountain side. Rhoades said the beetle outbreak started in 2002 and lasted roughly 10 years. The tour wrapped up day two with a whitewater rafting trip down Clear Creek in Idaho Springs.

Day 3: Ray Weller and Rick Cables from Vail Resorts gave a snow making presentation at the hotel in Breckenridge. Weller noted that 80% of the snow made will runoff into surrounding streams or rivers.

Before heading back to Nebraska, the tour stopped near Alma and Fairplay to inspect abandoned gold/silver-mining dredge. Gold was found in the Snowstorm Gulch in 1870 which led to the creation of the dredge “floating wash plant” that only ran for 16 months.

Brian Ritchie, a producer, farmer and rancher talked about his biggest take away from the three days…

Below are the full interviews with Bond, Rhoades, Nancy Comer a historian on the dredge and Ritchie.