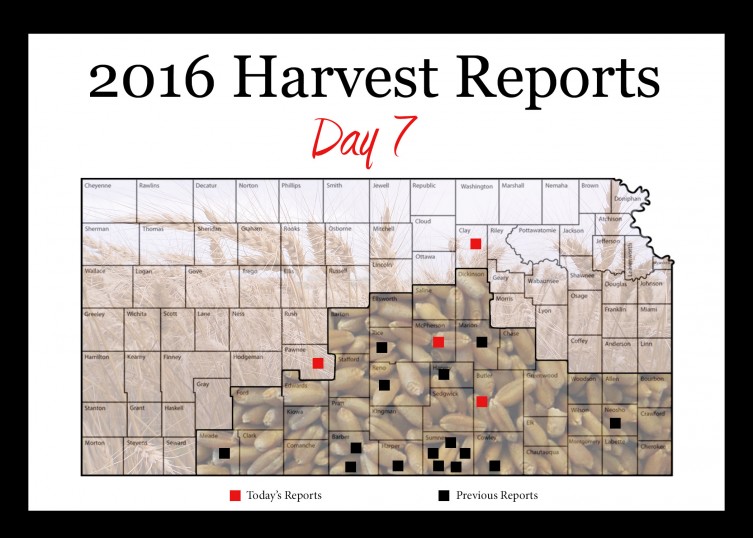 Harvest is just getting started in Pawnee County. Some test cutting began over the weekend and there was increased activity Monday through Wednesday, but so far, there’s not much to report from the area.

Rick and Melissa Clark from Galva, in McPherson County, Kansas, started their wheat harvest as the sun went down on Monday, June 13, and were almost 75 percent done by Wednesday.

Rick reported test weights around 61-63 pounds per bushel with moisture content at 11-12 percent. Compared to last year, Rick says that yields have been similar at around 50 bushels per acre, but test weights have been much higher.

“Yields have been good and it’s easy cutting,” said Rick. “There’s not much straw so it’s been easy to go through.”

Jason Rozean of Farmway Coop in Clay Center, Kansas, reports that harvest really got started in their area on Tuesday. Prior to that, a few loads had come in but the moisture was pretty high. For this beginning of the harvest, Rozean reports that test weights are averaging 60.6 pounds per bushel and moisture is now 12.2%. Protein is averaging 11.5%, which is pretty typical for the area. He expects this year’s crop to be less than last year’s due to fewer planted acres in the area. Harvest will last generally another 2-3 weeks.

Brent Floerke from Mid-Kansas Coop in Benton, in Butler County, reports that they’ve been taking in wheat for about a week, but it has been “slow going” because of moisture. Harvest has started picking up in the last couple days, but they’re expecting some rain to move in, which, depending on the location of the rains, could hold things up. Floerke expects the location to be taking in the majority of its wheat over the next week and a half.

Although it’s pretty early to get good averages, Floerke says test weights are 59-64 pounds per bushel and yields have been ranging from 35-55 or 60 bushels per acre. He expects this year’s crop will be “definitely better than the last two years.”

The 2016 Harvest Report is brought to you by the Kansas Wheat Commission, Kansas Association of Wheat Growers and Kansas Grain and Feed Association. For exclusive #wheatharvest16 content, please head to facebook.com/kansaswheat.