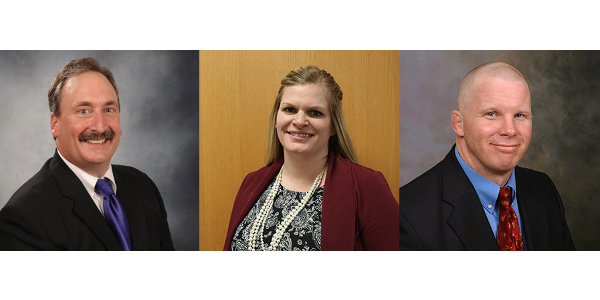 MANHATTAN, Kan. — Three Kansas State University faculty members in the Department of Animal Sciences and Industry were presented awards by the American Society of Animal Science at its annual meeting in Austin, Texas.

Bob Goodband received the 2019 American Feed Industry Association Award in Nonruminant Nutrition Research, which recognizes an individual who has contributed to and published outstanding work in the last 10 years.

Originally from Walpole, Massachusetts, Goodband graduated from The Pennsylvania State University in 1984. He obtained his master’s and doctorate in swine nutrition at K-State, and joined the faculty in 1989.

Goodband and his co-workers have played an important role in developing an intensive on-farm research program that has conducted numerous on-farm trials across the U.S. His work has resulted in 310 refereed journal papers, six book chapters, more than 1,000 research reports and extension publications, eight patents, and $13.9 million in grants and gifts to K-State.

Goodband also teaches Swine Science and Swine Nutrition courses and serves as academic advisor to more than 35 undergraduate students each year. He has served as the major professor for 22 master’s and doctorate students and on committees of an additional 113 students.

Cassie Jones received the 2019 ASAS Early Career Achievement Award, which recognizes an individual who has shown outstanding achievement as a young scholar and is working toward the professional organization’s mission.

An associate professor, Jones earned her bachelor’s and master’s from K-State and her doctorate in swine nutrition from Iowa State University in 2012. As the department’s undergraduate research coordinator, Jones oversees more than 100 undergraduates conducting research annually.

She teaches more than 250 students in seven different classes and advises approximately 60 students. Outside of teaching, Jones is an accomplished researcher in the area of animal feed safety, with more than 40 peer-reviewed publications, 100 abstracts, and $6.5 million in awarded grants, gifts and contracts during her seven-year career.

Jones and her husband, Spencer, raise Angus cattle near Wamego, and have three young children — Ty, Hayden and Hadley.

KC Olson received the 2019 ASAS Animal Management Award, which recognizes an individual who has contributed to excellent research in the biological or production management of livestock.

Olson’s graduate training at North Dakota State and K-State preceded his eight-year appointment in extension and research at the University of Missouri. In 2006, he joined the K-State faculty and is now a professor of animal science in a research and teaching role.

In 2011, he was awarded the W.M. and F.A. Lewis Distinguished Chair in Animal Sciences and Industry. His research has included more than 40 K-State scientists and 25 scientists from other universities.These projects supported degree requirements for 17 master’s, eight doctorate and seven undergraduate students under his mentorship.

Over the last decade, Olson has published 62 peer-reviewed journal articles, five book chapters, 48 proceedings papers and more than 100 abstracts. He has delivered numerous presentations around the globe. Olson’s previous honors include K-State Advisor of the Year, Excellence in Graduate Teaching and Excellence in Extension.

Caring for bulls during the breeding season