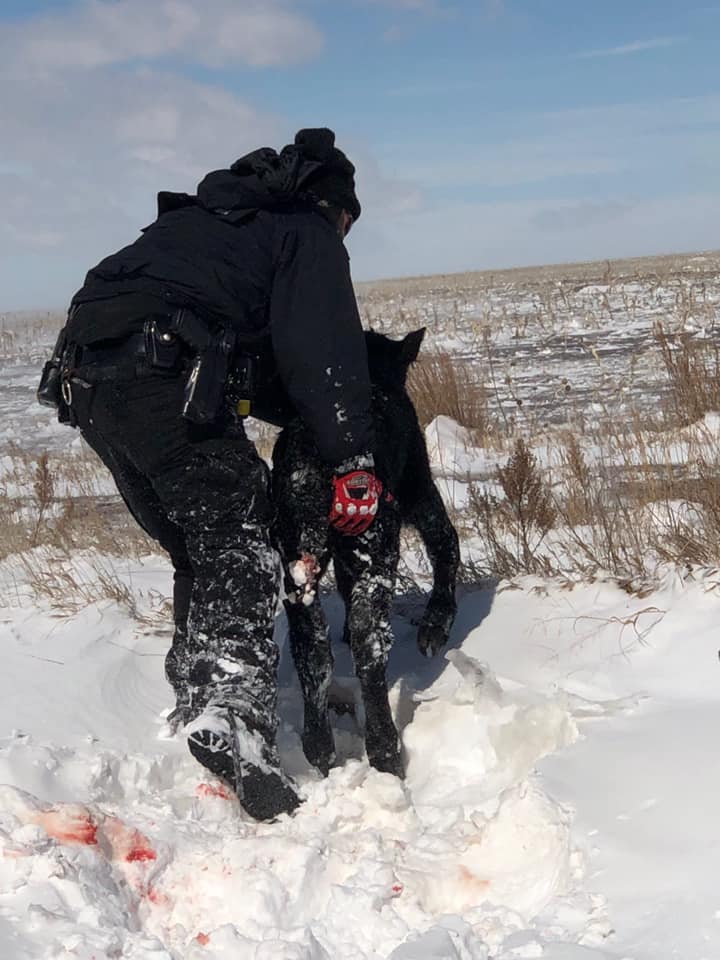 Trooper Buhlke #112 rescues a calf that was frozen to the ground near Sidney, NE, the morning after a blizzard ravaged the Panhandle (Photo Courtesy of Nebraska State Patrol)

In the opening paragraph of the FFA Creed there is the line, ” in the promise of better days through better ways, even as the better things we now enjoy have come to us from the struggles of former years.” When E.M. Tiffany wrote those lines, there was no such day as National Ag Day but, National Ag Day 2019 may have merged the day and the meaning behind the line.

Governor Pete Ricketts signed a proclamation declaring it  Ag Week in Nebraska on Wednesday, March 13th. The  Governor signed the proclamation inside the Rural Radio Network Studios in Lexington.

Listen to the Governor and Director of Agriculture here: https://post.futurimedia.com/krvnam/playlist/governor-ricketts-declares-ag-week-in-nebraska-6295.html

During the signing, Governor Ricketts urged Ag producers and Nebraska residents to prepare for the impending storm.

Even with meteorologists warning and the Governors urging,  producers could not know the upcoming storm would bring record low pressure. The pressure dropped so fast that it became what is known as a bomb cyclone.  Meteorologists refer to a strengthening low as “bombing” out if its minimum surface pressure drops by at least 24 millibars in 24 hours or less.  In just 13 hours, a bomb cyclone was seen in the Midwest.  As a result, Pueblo, Colorado had set a low pressure record on Wednesday.

By the morning of Thursday, March 14th, Eastern Colorado, Western Kansas and the Panhandle of Nebraska were under snow and heavy winds with blizzard like conditions. Eastern and Central Nebraska had heavy rains that swelled creeks and rivers. Flooding started to wash over roads and making travel dangerous.

Through all this, Ag producers worked to care for their livestock as best they could.  For numerous ranchers the storm hit during calving season. Susan Littlefield may have captured just how dire the situation was with her radio story, “In Their Own Words.” Littlefield spoke with Brooke Stuhr who ranches near Albion. Stuhr described how her husband worked through the night  and freezing rain to try and scrape pens. He then re-bed them so that the cattle would not be in knee deep in near freezing mud.

Listen to “In Their Own Words” here: http://bit.ly/2TPkGii

Stuhr’s story is similar to many producer’s across Nebraska, Kansas and Colorado who fought near white out conditions, more than a foot of snow, rain,  freezing rain,  and flooding. Ag producers truly struggled even with all their toil to try and prepare livestock and their property. They lost livestock, equipment, feed, and infrastructure like fence. This only marks the beginning as flood water recedes,  and the mud takes its place. Ag producers have a long road ahead. The mud will suck pickups and tractors in. The  mud will also be a harbinger of illness for newborn animals.

There are better days ahead though. The increased moisture will help green the grass when the weather warm ups. The silt from floods will deposit needed nutrients into productive bottom ground. The storm may have also showed ag producers how to better prepare and care for livestock in future storms.  It was National Ag Day and Ag producers celebrated by caring for their livestock and land. They knew that better days were ahead because of the current struggles.

For those that want to help those affected by the storm visit http://krvn.com/help-now/  .