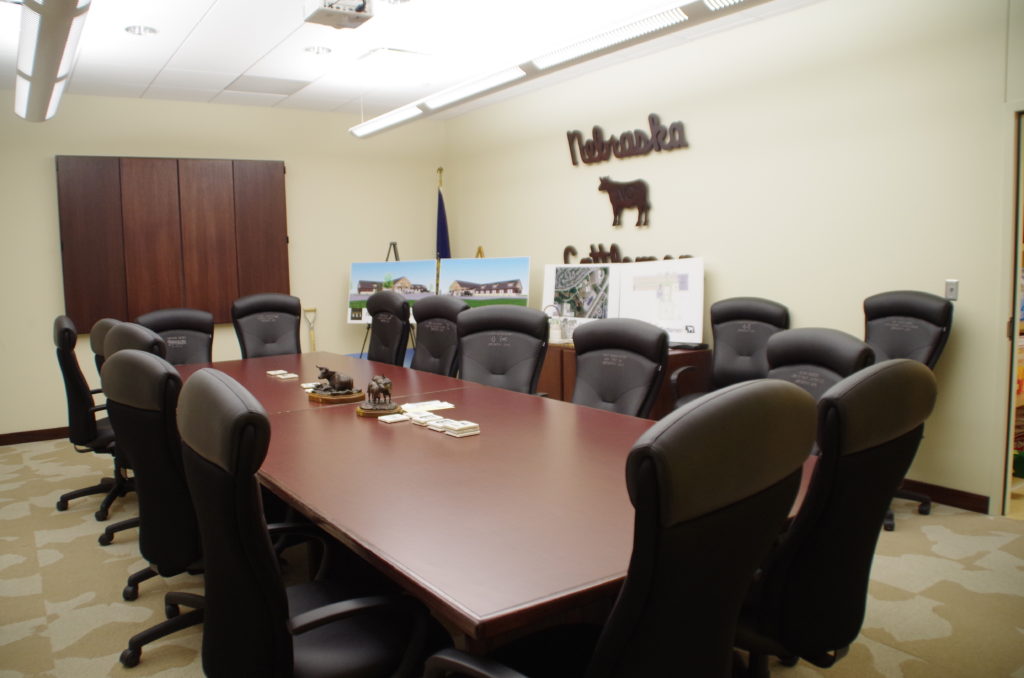 Cattlemen for the most part do not like ‘clubs’ or joining organizations, but in 1888, when Nebraska Sandhills was being discovered as prime cattle raising country, and rustling of cattle was the major problem of the cattlemen, the Nebraska Stockgrowers with less than a dozen members owning approximately 5,000 head of cattle was formed. In two years or so, the membership doubled with over 20,000 head of cattle owned by the members. There was a drive in 1875 forming an organization with the same name covering three western counties, but 1888 is listed as the official start of the Nebraska Stockgrowers.

Growth in the fledgling association grew by leaps and bounds. Since Alliance was where the new association began, that was where the office headquarters was to begin with. At the centennial of the Stockgrowers in 1988, a new organization formed when the Nebraska Livestock Feeders Association (formed in 1944) and the Nebraska Feedlot Council (formed in 1987) combined with the Stockgrowers to become what is now the Nebraska Cattlemen (NC). The Sandhills Cattle Association, (SCA) with office in Valentine, took a vote in 1988 to remain separate from the NC. Many members belong to both groups, as the SCA concentrates solely on the activities and promotion of Sandhills beef, letting the NC handle the lobbying and politics necessary to keep Nebraska beef in the forefront of the nation and the world.

Four offices (the NC had a satellite office in Alliance as well as Lincoln until 2011) merged into one in Lincoln, close to the capitol “a ten-minute walk”, stated Pete McClymont, executive director of the NC. That office was 4000 square feet. The views from the offices with windows was of the parking lot, a cracker box offering at best. The other offices had no windows at all. Rent not only for the building but for the prime parking of the staff and the NC lobbyist cost the NC dearly. The yearly lease on the suite of rooms was $80,000 per year.

The NC office had a board room, but the field staff in outstate when they would come to meetings, had to hold their laptops on their laps as no room at the table. When the full board met, directors, council and committee chairs and vice-chairs, over 30 if all came, the NC would rent a conference room at the Cornhusker hotel or elsewhere.

A discussion for a building they could call their own began at the summer board meeting in 2015. A task force was formed, several potential sites were looked at. The rent amount for the next ten years was part of the discussion, as was parking.

The task force recommended to the board, that land be purchased, and a new office built, the board voted to accept the task force’s recommendation. Several sites were looked at, the lots in what was called Nebraska Technology Park in northeast Lincoln, not far from the Lancaster event center was the most favorable; not far off I-80 or from the airport. “We traded a ten-minute walk to the Capitol, for a ten-minute drive,” stated McClymont. The acreage was owned by Kearney, Nebraska native and investor, Mark Suleiman, who owns, what else, but burger restaurants. The area at one time was looked at by the University of Lincoln for their Innovative Campus.

Architect for the new building was Studio951.  Bids were accepted, with the winning contractor having deep ties to the Nebraska Cattlemen. Dave Masek is from Purdum, Nebraska in the heart of the Sandhills. His wife, Brenda, is the daughter of Sandhills rancher, Earl and the late Claudia Bestol. Brenda has been active in the NC, most recently completing her term as Region 2 Vice-Chair of Member Services. Several years ago, she and others, re-vitalized the Nebraska Cattlemen Sandhills Affiliate, having served as president and board member of that group. Though off the boards of both the regional and state NC, she continues to be active promoting beef. She is the rancher, Dave is the contractor, each helps the other when needed, but each knows who the boss is of what. This joint cooperative has been going on for over twenty-five years. Both come to help at the Beef Pit during the State Fair. Masek’s winning bid was for $1.7 million.

Volunteers to head up a fundraising drive came forth; the goal was for $1 million. The “Building for the Future Campaign” kicked off at the NC annual convention in Kearney in 2017.  (The NC did have savings that will help fund the new building). Ann and Dave Bruntz from Friend, Nebraska own Bruntz Farming and Feeding, Inc. Prior to retiring, both were active in numerous state ag organizations beside the NC. Dave was on the NC board serving as president in 1997 and Ann served as chair of the Nebraska Beef Council. She also was the director of the UNL foundation. Jana Powles Jensen from Bingham worked for NC membership in the Alliance office while also helping on her family’s ranch that has been cared for by them for over 100 years.

“We are still in fundraising mode, but with all the disaster relief needed, the fundraising campaign is in a silent mode. We have had over 215 individuals, affiliates and business partners come forth with donations so far,” stated Ann.  “It has already been used for group meetings as it is easily accessible with good parking. There are still opportunities to make an investment in the building and grounds, so give us a call or go to nebraskacattlemen.org website.”

Jensen commented that the new building “is indeed a wonderful space for conducting BEEF business, educating and socializing.” Reiss Bruning, owner of another long-standing family beef operation, Bruning Farms of Bruning, Nebraska was also on the core fundraising committee.

There of course was many nay sayers, believing the new building too extravagant. “After coming to some of the meetings here, seeing it first-hand, many of them have come to me complimenting us on it,” stated McClymont.

The new building is doubled in size of the old with 8000 square feet. All offices, although smaller in size, have windows with some amazing views of nature undisturbed with the native grasses and wildlife around a small pond. The board room is approximately the same size, but an educational room that can seat 75 has already been used numerous times. Melody Benjamin, out-state field staff for the NC (Vice-President of Member Services) ranches with her family near Lakeside. In looking over the plans she was excited to have table space for her laptop when she came to meetings instead of balancing it on her lap. “The new office building is an asset already showing its worth to the membership beyond simply providing workspace for the staff in Lincoln.  We hosted the Allied Industry Council meeting in late March.  We had a meeting room large enough to hold people comfortably and with the larger kitchen area, we had a very functional place for the meal to be set up.  Selfishly, having a place the out-state staff can sit to work is so nice.  Having lots of parking for us is really appreciated,” stated Benjamin. The new NC building has been the headquarters for commodity groups coming together to deal with the devastating Nebraska flooding in the east and the blizzards of the west. As stated earlier, renting outside meeting area is no longer needed, thus saving money.

Due to the inclement weather, the building process was delayed, as was the landscaping. Tentative date for moving in was pushed back several times. June 28th will be the open house for the new office. “Hopefully we can get our landscaping done before then,” McClymont stated.

Another proof positive that the new NC office was meant to be was the new address – one of the routes at the Nebraska Technology Park was named Cattle Drive, but no one was receiving mail with that address. Again, initiative was started by NC staff, namely, editor of the monthly Nebraska Cattlemen magazine, Mike Fitzgerald, to check into the prospect for the city council of Lincoln to vote on allowing the NC office to have a Cattle Drive address. Months of visiting with council members followed and earlier this year, the council voted 7-0 to allow NC to have the address 4611 Cattle Drive. “It was the most inexpensive promotion we could ask for, as national papers, such as USA Today and US News and World Report picked up on the address change,” stated McClymont.

The new headquarters of the Nebraska Cattlemen, 4611 Cattle Drive, Lincoln, Nebraska is, and will be in the future, the foundation the NC can continue to build upon for generations of Nebraska beef producers to come.