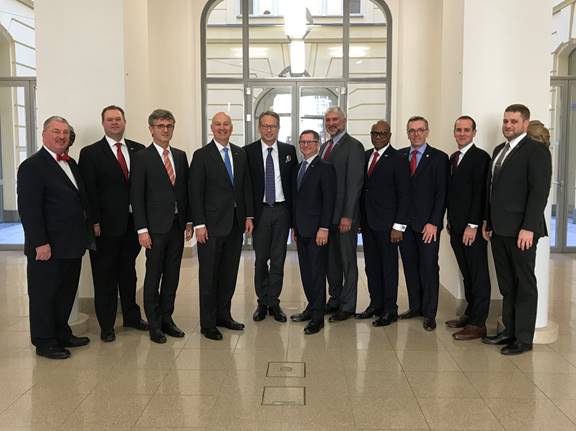 Nebraska Governor Pete Ricketts and a delegation of more than 25 Nebraskans are on a trade mission in Germany this week.

On the second day of the mission, the group had a briefing from the U.S. Embassy in Berlin on trade and investment opportunities in Germany.

Later in the day, Ricketts met with high-level German officials from the Ministry of Economic Affairs and Energy as well as the Ministry of Transportation.  Additionally, the Governor attended a working lunch with members of Germany’s Bundestag (federal legislative body).

The day concluded with a “Friends of Nebraska and Alumni” reception, sponsored by the University of Nebraska-Lincoln and Nebraska Department of Economic Development.

The University of Nebraska system has over 300 alumni living in Germany.  This event, and similar ones on other trade missions, strengthen the state’s network of Nebraskans, alumni, and business partners abroad who help promote the Good Life around the globe.