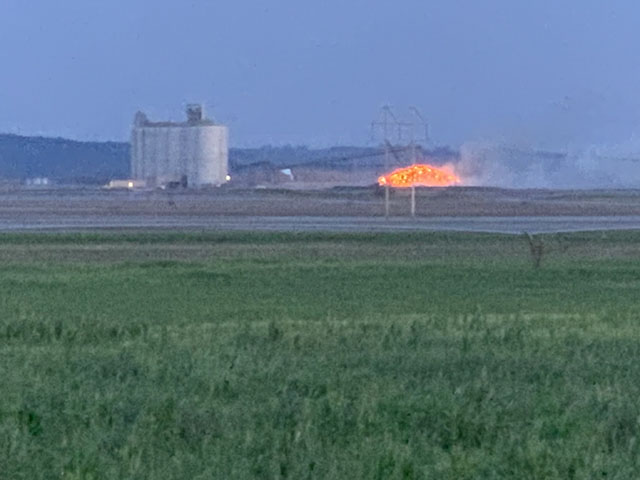 An outdoor pile of soybeans that combusted during the summer heat earlier this month off Interstate 29 in northwest Missouri appeared to be covered in flames Friday. (Photo courtesy of Richard Oswald and DTN Grains)

OMAHA (DTN) — A large outdoor soybean pile at a floodwater-surrounded grain elevator in northwest Missouri was glowing bright yellow and orange and appeared to be covered in flames Friday, nearly two weeks after the grain combusted during a heatwave. Earlier in the week, black smoke was seen rising from the pile, but no flames were visible.

The area where the grain elevator, which is owned by Gavilon, is located between the Missouri River and Interstate 29 around Phelps City, Missouri, remains flooded by an unplugged levee breach on the river. Local roads also remain underwater or were heavily damaged from floods that began in mid-March.

So far, only local railroad repair workers and law enforcement have been able to use Highway 136 leading into the facility.

The outdoor soybean pile, which appears far enough away to avoid damaging the rest of the grain elevator, began smoldering as temperatures rose in mid-July and became hotter as temperatures climbed to around 100 degrees Fahrenheit late last week.

A local farmer estimated the volume of soybeans amounted to several hundred-thousand bushels. A spokesman for Gavilon declined to say how large the pile is, but acknowledged that the best course of action is to let the beans continue to burn.

“With the isolation of the facility due to floodwaters, it has been determined that the safest action is to let the fire burn itself out,” said Patrick Burke, a marketing and communications manager with Gavilon. “We continue to monitor the situation and work with authorities to ensure the safety of our personnel and the surrounding area.”