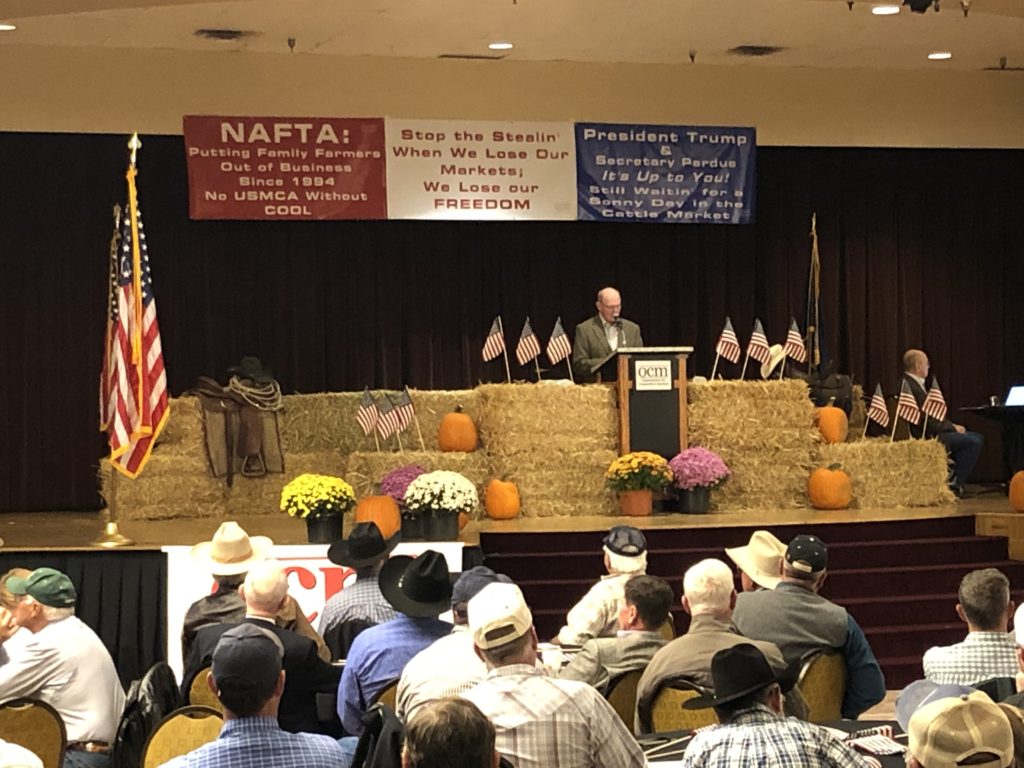 Photo by Chad Moyer
OMAHA (DTN) — Cattle producers rallied Wednesday in a daylong event at an Omaha hotel, calling on President Donald Trump to bring more fairness to cattle markets and to reduce the influence of imported beef and cattle on U.S. market prices.

AUDIO: RRN’s Chad Moyer with an interview with former State Senator Al Davis, on the board of the Independent Cattlemen of Nebraska.

Organizers sought to capture some of the same fire they held in 1994 when a large packer at the time stopped buying cash cattle for several weeks, crashing the live cattle markets and sparking a similar rally at the same Omaha hotel.

Roughly 350 cattle producers attended Wednesday’s event, and they were asked to take to social media with the hashtag #FairCattleMarkets and mention President Trump’s Twitter account, @realDonaldTrump, in their tweets.

“I’m fired up, I’m wound up and I want this administration to do something about it,” Callicrate said. “They don’t need an act of Congress.”

Some of the key demands at the rally included restoring some of the changes to livestock marketing rules that were proposed late in the Obama administration then withdrawn by the Trump administration, especially clarification that a producer does not need to demonstrate harm to competition to bring a claim against a packer. Speakers also want USDA to reconstitute the Packers and Stockyards Administration, which now is under the umbrella of the Agricultural Marketing Service.

“We just want a fair shake, and I can tell you these cattle producers don’t want a government check, they just want the markets to be fixed,” said Wes Schoemyer, a row-crop farmer and cattle producer in northeast Missouri.

One of the biggest points of the rally runs directly counter to a key piece of the Trump administration’s agenda on trade. They want the U.S. to withdraw from the U.S.-Mexico-Canada Agreement (USMCA) until country-of-origin labeling is included in the trade deal.

COOL was implemented in 2009 on meat labels, but Canada and Mexico sued the U.S. in the World Trade Organization and received a ruling that the way the U.S. implemented COOL discriminated against foreign livestock. At the behest of the packing industry and some livestock trade groups, Congress revoked COOL in late 2015.

“We produce the best product in the world, and we need to have it identified in the marketplace,” said Fred Stokes, former executive director for the Organization of Competitive Markets, one of the lead organizers of the rally. His comments drew a round of applause.

Most speakers Wednesday in some way or another pointed to the price collapse the week of Aug. 12 after a fire the weekend earlier at Tyson Foods’ packing plant in Holcomb, Kansas. The plant, which is closed until likely January, accounted for about 6,000 processed cattle a day, or about 5% of the market. Live cattle prices dropped about $8 per hundredweight in the days following the fire while boxed beef prices rose.

Kansas State University released a report in mid-September that stated that Kansas feedyards lost $184.99 per head in August while packer margins spiked to nearly four times their annual average, or roughly $549. KSU stated in that same report that cattle feeders likely will not see a positive net return on steers or heifers until May 2020.

September is a month that cattlemen don’t want to relive, noted DTN Livestock Market Analyst ShayLe Stewart. Live cattle futures prices dropped as low as $94.60 in the second week of September. Prices haven’t been that low since October of 2016. Cash cattle prices followed suit, and the market completely eroded.

“Cattlemen expect to see lower live cattle prices in summer months, but selling fat cattle for under $100 is hard to swallow,” Stewart said. “And what really came as a shock to many producers is when boxed beef prices soared. The last week of August, choice cuts were selling for $234.35 and select cuts for $211.85. For the last week of September, choice cuts sold for $214.50, while select cuts sold for $190.12.”

Agriculture Secretary Sonny Perdue announced in late August that the Packers and Stockyards Division would conduct an investigation into the price spread between live cattle and boxed beef following the Tyson fire.

“The problem is the agency that would conduct this investigation has been abolished and been moved over to an agency that is cozy with the packers,” said Stokes.

Despite Perdue’s action, the rally included signs calling on President Trump to fire the ag secretary. Cattle producers and others pointed to Perdue’s comments quoted Tuesday in Wisconsin suggesting farmers get bigger to survive.

“In America, the big get bigger and the small go out,” Perdue was quoted as saying after an appearance at the World Dairy Expo. “I don’t think in America we, for any small business, we have a guaranteed income or guaranteed profitability.”

“The secretary’s comments are very disconcerting — the view that the factory-farm movement is going to put the family farm by the wayside,” Bullard said.

Bullard argued cattle producers have faced an inexplicable price collapse in 2015, despite strong beef demand, near-record beef prices and strong exports. Still, Bullard noted it was the price collapse after the Tyson fire that “set off a firestorm” in the countryside.

“I think it is all of those factors that came together to become the proverbial straw that broke the camel’s back,” Bullard said. “So the industry is now keenly focused on the structure of the marketplace and how that marketplace is not returning to them a competitive price for their cattle. All of that set the stage for this rally.”

R-CALF is in the midst of a lawsuit against the four large packers, arguing the packers have colluded to suppress prices for producers and inflate margins and profits for packers. R-CALF alleges this price collusion began in January 2015 and continues. Bullard noted the litigation will likely take a couple of years, but at the moment, calf prices are even lower, down roughly $250 from the five-year average of the industry, Bullard said.

“And this is putting severe financial strain on our nation’s cow-calf producers, and will likely render some, if not many, unable to continue their operations,” Bullard said.

Regarding what should happen after the rally, Bullard said Congress should not pass the USMCA, arguing that independent cattle producers in the U.S. lost operations and cattle numbers over the past 25 years under the North American Free Trade Agreement.