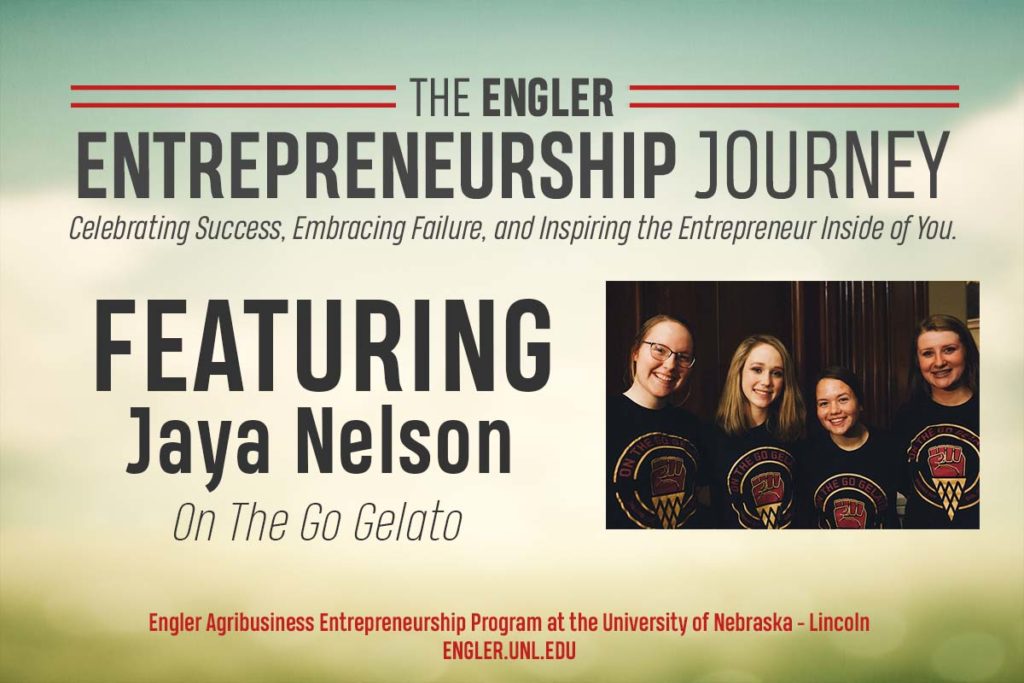 ...We’ve just used that negative feedback as energy to light a fire under us and just power through and say ‘We’re going to show you that we can.'

Forty-five. That’s the average age of an entrepreneur in the United States, according to Duke University.

Nelson, alongside her three peers Karley Anderson, Jillian Buell, and Grace Olson, makes and serves gelato out of her school’s kitchen.

Nelson said they worked closely with Brennan Costello, a former Engler student and UNL graduate. “He helped us start thinking up business ideas and get a business model, and he kind of helped put it in place.”

The idea for gelato came after Jaya and another business partner spotted a gelato shack during FFA leadership training. They’ve learned a lot about gelato since they got started, but Nelson said running a business has taught them a handful of other valuable lessons, like time management and communication.

During this entrepreneurship journey, the group has encountered negative feedback and doubt from some people. Nelson said that because it’s a group of four teenage girls running On-The-Go Gelato, not everyone takes them seriously or thinks they can run a business. But that has not slowed them down.

“We just kind of thought in our minds, In a month from now, three months from now when we’re doing good, you’re going to regret that you didn’t take us seriously and didn’t support us… I guess we’ve just used that negative feedback as energy to light a fire under us and just power through and say ‘We’re going to show you that we can.”

Since the group got started, they catered the Shark Tank event in Lincoln and even got to pitch their business. But their one-minute pitch was about much more than On-The-Go Gelato.

“We’re not just here to serve gelato. Our motto is Dishing Out Girl Power.”

All four young entrepreneurs received scholarships from the Engler Agribusiness Entrepreneurship Program. Nelson said it’s her goal to attend UNL, major in Agriculture Education and be a part of the Engler community.

In the coming months, Nelson wants to cater more events and continue Dishing out girl power.

“The Engler program was a huge help to us and our ag teacher, Mrs. Dvorak, has been there every step of the way. We really couldn’t have done it without her, without the Engler program and without each other.”