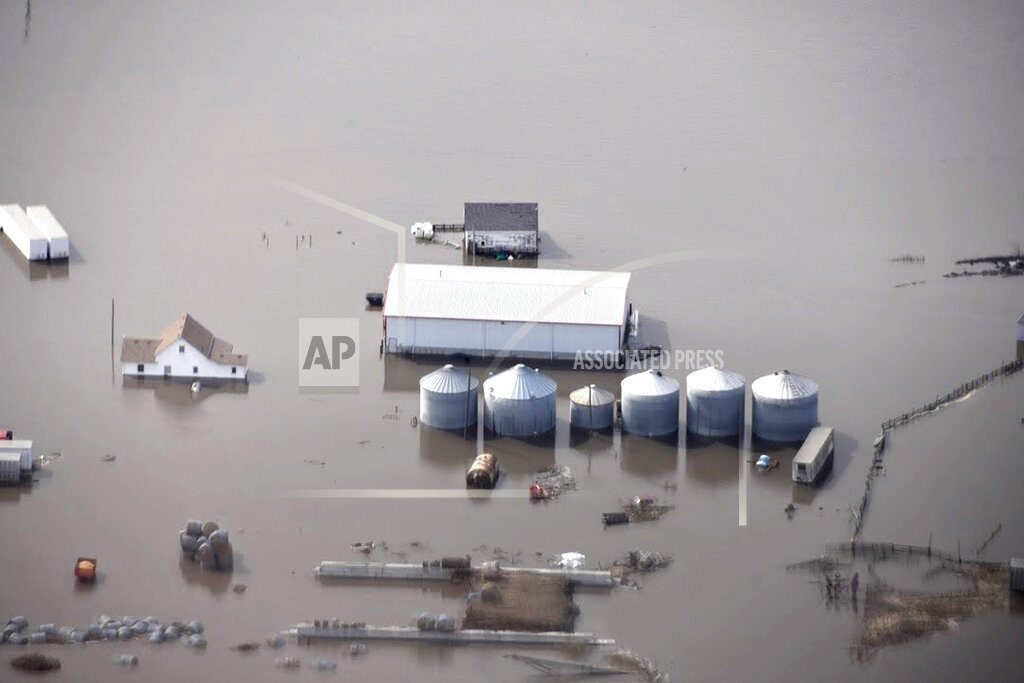 MALVERN, Iowa (Reuters) – The Black Hawk military helicopter flew over Iowa, giving a senior U.S. agriculture official and U.S. senator an eyeful of the flood damage below, where yellow corn from ruptured metal silos spilled out into the muddy water.

And there’s nothing the U.S. government can do about the millions of bushels of damaged crops here under current laws or disaster-aid programs, U.S. Agriculture Under Secretary Bill Northey told a Reuters reporter who joined the flight.

The USDA has no mechanism to compensate farmers for damaged crops in storage, Northey said, a problem never before seen on this scale. That’s in part because U.S. farmers have never stored so much of their harvests, after years of oversupplied markets, low prices and the latest blow of lost sales from the U.S. trade war with China – previously their biggest buyer of soybean exports.

The USDA last year made $12 billion in aid available to farmers who suffered trade-war losses, without needing Congressional approval. The agency has separate programs that partially cover losses from cattle killed in natural disasters, compensate farmers who cannot plant crops due to weather, and help them remove debris left in fields after floods.

But it has no program to cover the catastrophic and largely uninsured stored-crop losses from the widespread flooding, triggered by the “bomb cyclone” that hit the region in mid-March. Congress would have to pass legislation to address the harvests lost in the storm, according to Northey and a USDA statement to Reuters.

“It’s not traditionally been covered,” he said. “But we’ve not usually had as many losses.”

Indigo Ag, an agriculture technology company, identified 832 on-farm storage bins within flooded Midwest areas. They hold an estimated 5 million to 10 million bushels of corn and soybeans – worth between $17.3 million to $34.6 million – that could have been damaged in the floods, the company told Reuters.

Across the United States, farmers held soybean stocks of 2.716 billion bushels as of March 1, the largest on record for the time period, the USDA said on Friday. Corn stocks were the third-largest on record.

Some Congress members have expressed interest in pursuing legislation to provide aid for damaged crops in storage, Northey said. But passing legislation could require a lengthy political process in the face of an urgent disaster, U.S. Sen. Charles Grassley told farmers at a meeting in Malvern, Iowa.

“If we have to pass a bill to do it, I hate to tell you how long that takes,” said the senator from Iowa, who joined Northey on the helicopter tour.

With farm incomes declining for years before the flood, many farmers had planned to sell their grain in storage for money to live, pay their taxes or finance operations, including planting this spring.

Farmers will have to destroy any grains that were contaminated by floodwater, which could also prevent some growers from planting oversaturated fields.

Near Crescent, Iowa, farmer Don Rief said the flood damaged more than 60,000 bushels of his grain, worth hundreds of thousands of dollars. He tried to move the crops before the flood, but dirt roads were too soft from the storm to support trucks.

“We were just hurrying like hell,” Rief said. “Hopefully USDA will come in and minimize some of the damage.”

The USDA does not have a program that covers flood-damaged grain because farmers have typically received more advance notice of rising waters, allowing them to move crops and limit losses, said Tom Vilsack, who ran the agency under former President Barack Obama.

In this case, floods inundated fields quickly after multiple levees failed when rain and melting snow filled the Missouri River and other waterways. The frozen ground was unable to soak up the water.

Near Percival, Iowa, railroad tracks leading up to a grain facility were flooded and broken. A Deere & Co (DE.N) dealership, Wendy’s restaurant, Motel 6 and gas station nearby were also underwater, along with homes, cars and farm equipment.

Some farmers moved machinery such as tractors on to highways to keep it out of the path of the floods. The equipment was still parked there during the flyover on Friday.

Of that, about 309,000 acres will be eligible for the federal program that helps farmers and ranchers remove debris left by natural disasters on farmlands, De Jong said last week. She estimated the program would need about $34 million to clean up the fields.