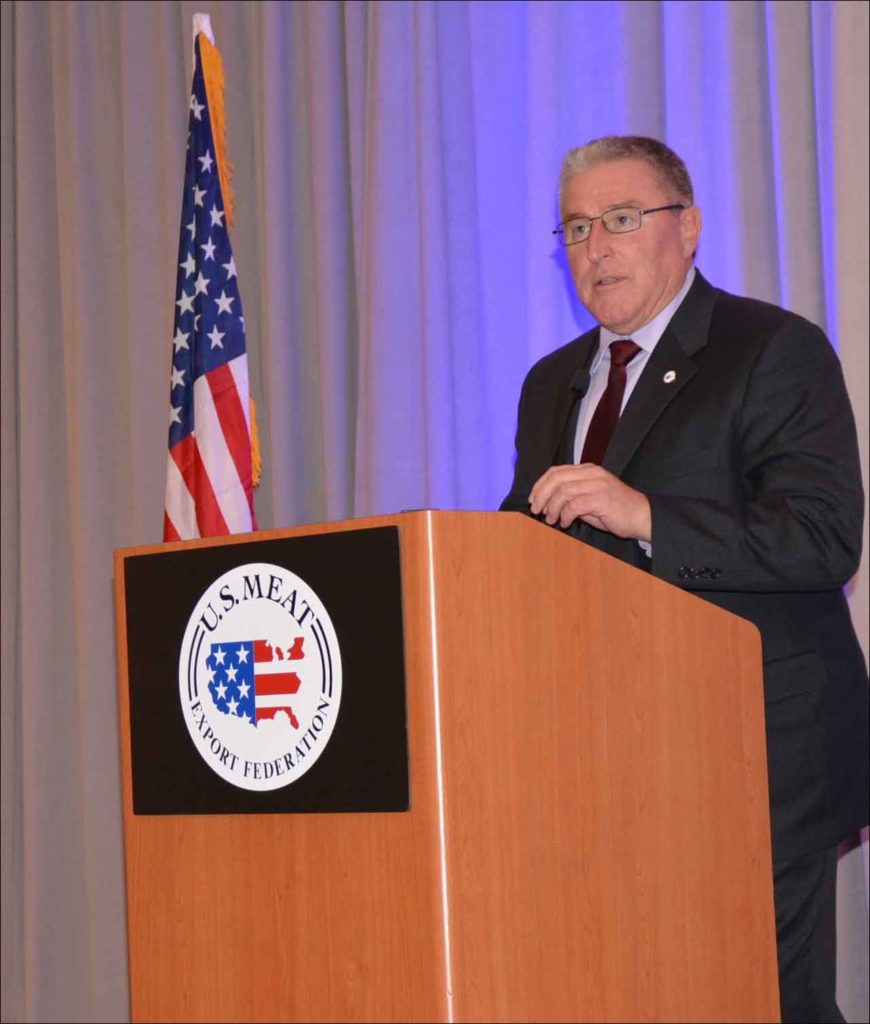 “My first involvement with USMEF was when I was marketing chair with the Idaho Cattle Association,” recalled Jones, who along with his brother operates Intermountain Beef, a custom feedlot. “As part of my duties I would go to national conventions where USMEF staff and leadership shared information about their work in international markets. This was a tremendous eye-opener. I valued the importance of export markets then, but value it even more today.”

Jones became president of the Idaho Cattle Association in November 2003, shortly before one of the most disruptive events in the history of the U.S. beef industry.

“About one month later, I got the phone call — BSE,” Jones said. “Then I truly realized how important our exports markets are, when they closed overnight. But in time I got to see USMEF in action, helping to get those markets reopened.”

Jones later chaired the Idaho Beef Council and the Federation of State Beef Councils, and served on the Beef Promotion Operating Committee, further enhancing his interest in expanding global demand for U.S. beef.

As he took the helm at USMEF, Jones encouraged members to remain steadfast in their commitment to international marketing, even in the face of trade barriers and ongoing volatility.

“I expect the trade environment to continue to be very challenging, but we have experienced, dedicated people on the ground in international markets across the world who give USMEF the ability to adapt and change,” he said.

The USMEF officer team for 2019-2020 reflects the organization’s diverse membership. The new chair-elect is Pat Binger of Wichita, Kan., a vice president at Cargill Protein Group. Binger has been in the red meat industry for more than 30 years, including 27 years in international sales and 16 years directing Cargill’s overseas network of offices.

Mark Swanson is USMEF’s new vice chair. He is CEO of Birko Corporation, headquartered in Henderson, Colo., and has more than 20 years of experience with some of the most respected institutions in the protein industry, including Iowa Beef Processors, ConAgra Foods and Swift and Company.

The newest USMEF officer is Dean Meyer, who was elected secretary-treasurer. Meyer, a corn, soybean and livestock producer from Rock Rapids, Iowa, is a director of the Iowa Corn Growers Association. He has also served as chair of the Iowa Corn Animal Agriculture and Environment Committee and the Lyon County (Iowa) Pork Producers.

On the final day of the conference USMEF members also received an informative breakdown of the trade landscape in Asia from Wendy Cutler, vice president of the Asia Society Policy Institute. Cutler previously served as the Office of the U.S. Trade Representative’s chief negotiator on the Korea-U.S. Free Trade Agreement and led bilateral negotiations with Japan under the Trans-Pacific Partnership (TPP).

Cutler reviewed the events that have taken place since the U.S. withdrew from TPP, starting with Japanese Prime Minister Shinzo Abe’s efforts to convince President Trump to return to the agreement. Eventually a preliminary U.S.-Japan trade agreement was reached and it is now under consideration by the Japanese Parliament.

“The great news for you is that this is largely an agricultural deal,” Cutler said. “Under this agreement we secured from Japan most of the agricultural market access that we forfeited when we lost TPP. And I think what’s really great for beef and pork is that when this deal goes into effect, which should be Jan. 1, we’re going to come into that deal ‘caught up’ with the other TPP countries, meaning that we’ll get the same tariff rates that they’re getting.”

Cutler said U.S. agriculture is understandably encouraged by progress in the U.S.-China negotiations, as the two sides are said to be close to completing a phase one agreement that will improve access for agricultural exports. But she cautioned that the situation remains very volatile, and that finalizing the details of such an agreement often proves difficult.

Earlier in the conference, a panel discussion focused on the potential impact of alternative proteins on global demand for red meat. The session was moderated by USMEF Economist Erin Borror and included Jihae Yang, USMEF director in South Korea; Yuri Barutkin, USMEF representative in Europe; and Glynn Tonsor, a professor in the Department of Agricultural Economics at Kansas State University.

Facing up to the challenge posed alternative proteins was also a component of “Capitalizing on the Greatest Sustainability Story in History,” a presentation offered by Allan Gray, a professor at Purdue University and director of the school’s Center for Food and Agricultural Business.

Gray’s advice to USMEF members is to compete for consumers by helping people understand why traditional meat is the best choice.

“We all like choices, so the urge to take away alternative proteins as a choice may not be the best strategy,” he said. “What we should be saying to them is, ‘you have choices, but our product is the best choice and here is why.'”

USMEF President and CEO Dan Halstrom briefed members on a number of key issues that could open new opportunities for U.S. red meat exports. In addition to the U.S.-Japan trade agreement, Halstrom said a U.S.-specific share of the European Union’s duty-free beef quota will deliver more reliable and consistent access to the high-value European market. This measure is currently under consideration in the EU Parliament. Halstrom also stressed the importance of bringing the U.S.-Mexico-Canada Agreement to a ratification vote.

“From a carcass utilization standpoint, Canada and Mexico complement our Asian markets perfectly,” Halstrom said. “I hate to think what round prices would be if not for Canada and Mexico, because we don’t sell many rounds to Asia. On the pork side, there are some hams exported to Asia but it’s not the primary item. Hams are the No. 1 item going to Mexico and pretty high on the list for Canada.”