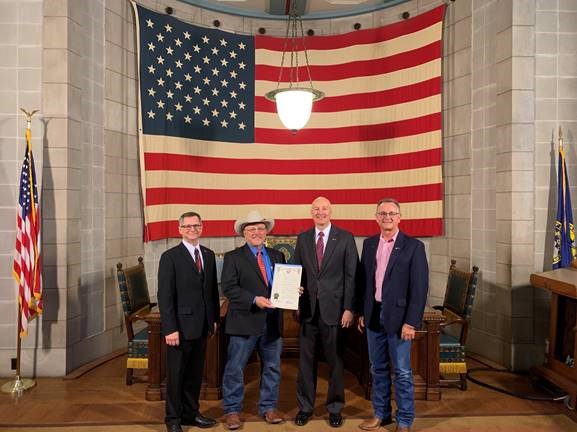 LINCOLN – Today, Governor Pete Ricketts was joined at the State Capitol by representatives from Nebraska’s beef industry to proclaim May as Beef Month.  Nebraskans celebrate Beef Month every May to highlight the importance of the cattle industry to the state.  The Governor hosted a press conference to sign an official proclamation and to provide an update on Nebraska’s growing beef industry.

“Nebraska’s beef producers are the best in the business.  Thanks to their excellent work, Nebraska tops all states in commercial red meat production and cattle on feed,” said Governor Ricketts.  “Nebraska beef has earned a worldwide reputation for its premium quality, and we’re now exporting more of it than ever before.”

Governor Ricketts has been an active proponent of Nebraska’s beef industry.  He has led trade missions to Japan, China, and Mexico to encourage the growth of Nebraska’s beef exports.  He has also promoted Nebraska beef domestically in places such as New York City.

Nebraska is first in the nation in rankings for beef exports, commercial cattle slaughter, and cattle on feed.

“Nebraska is a national leader in all aspects of the beef industry including production, exports, and cattle on feed, so we’re pleased that Governor Ricketts proclaimed May as Beef Month,” said NDA Director Steve Wellman.  “The continued growth of the beef industry in Nebraska and the top rankings we’ve achieved show our support of agriculture as a whole and confirms what we already know: that delicious Nebraska beef is being enjoyed by consumers here at home and around the world.”

“There are a lot of unsung heroes who put their heart and soul into producing the best beef in the world raised right here in Nebraska,” said Mike Drinnin, President of the Nebraska Cattlemen.  “Whether you’re fixing fence on a ranch, delivering feed to the cattle, or hauling the beef to restaurants, everyone’s important to showcasing Nebraska beef!”

“Exports are a tremendous value to beef producers and we are proud to work with NDA to promote beef from Nebraska in places like Hong Kong, the European Union, and other parts of the globe,” said Buck Wehrbein, Chairman of the Nebraska Beef Council.  “International trade missions are a strategic way of investing the beef checkoff to support our beef community.”