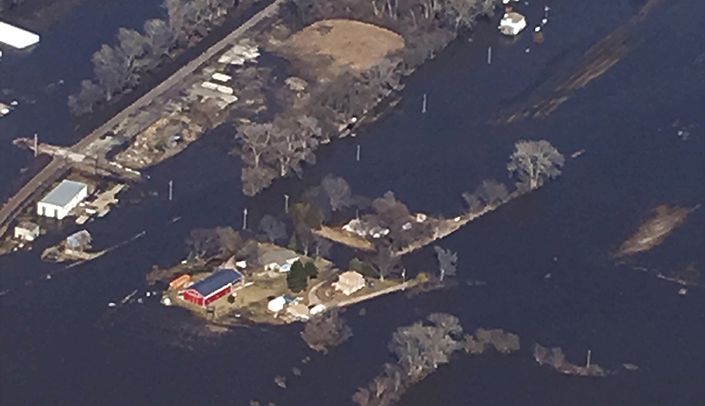 COURTESY/ UNMC. Some of the flood devastation in Nebraska is obvious from this aerial photograph of farm property between Fremont and Omaha. (Photo by Zach Duysen)

Federal officials estimate the bomb cyclone weather phenomenon and subsequent flooding caused $1.4 billion in damages in the state of Nebraska. The damage assessment accounts for livestock, crop loss and infrastructure damage, but does not reflect personal property losses such as homes and farm buildings. Steve Nelson, president of Nebraska Farm Bureau, has met with dozens of families in many of the agricultural communities impacted by the recent storms. Nelson explained that while there is insurance to cover some cattle and crops, it doesn’t cover all of the losses.

“Depending on the severity of the flooding, many farmers will likely be unable to plant all of their land this year, and many livestock producers will have reduced production as a result of this disaster as well,” said Nelson. “When you combine people helping people, either through donations of resources or money, it makes a difference.”

Nebraska Farm Bureau’s Disaster Relief Fund provided immediate support for feed, water and medicine for livestock; drinking water for schools; and emergency living expenses. Aid is now focused on supplies to repair roads and fences to access homes and to care for livestock; clearing debris from farm fields; and monetary distributions to families who are beginning the long process of clean up and rebuilding. One hundred percent of donations will be distributed to those in need.

Nebraska Cattlemen is taking action to help ranchers and cattlemen, too. Pete McClymont, executive vice president of Nebraska Cattlemen, said the response from the community has been generous and heart-warming. McClymont said many cattle and beef producers don’t want the attention that has been put on them as a result of the storm.

“Gifts received by Nebraska Cattlemen Disaster Relief Fund will be disbursed to cattle producers in need, regardless of membership in Nebraska Cattlemen,” said McClymont. “This entire process has been very humbling knowing some cattlemen and women that were heavily impacted have already turned away assistance. We want every rancher, farmer, producer that has been impacted to know there are monies for qualified applicants. Every dollar given to a fund was donated with those impacted in mind.”

Video: A new initiative in Nebraska is keeping farmers top of mind as they rebuild their lives after massive flooding this spring. The initiative is called Stay Strong Nebraska.