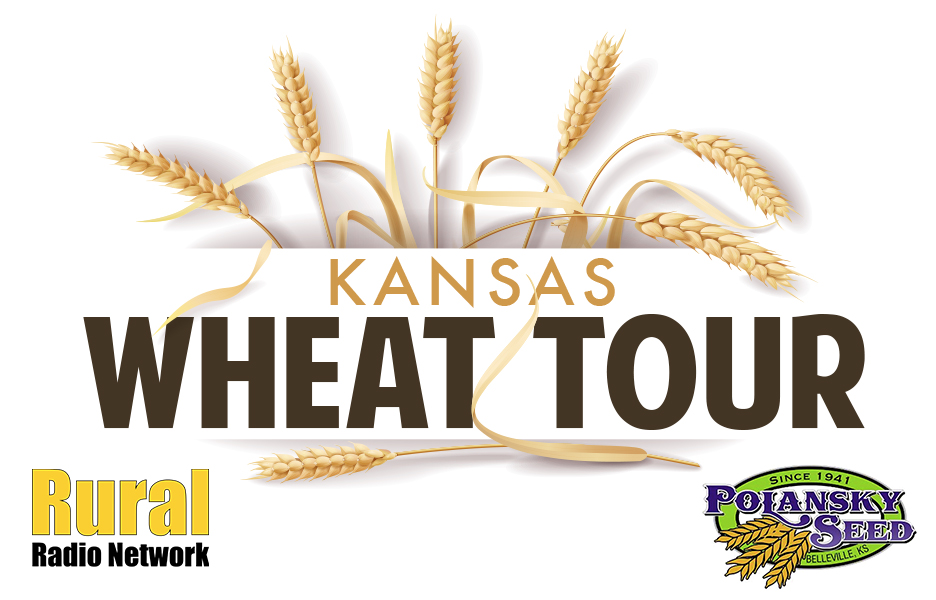 The Winter Wheat Tour made it’s final turn back to the north, to return to Manhattan where it all started just two days prior. Traveling through the flint hills wheat fields were limited, but most cars were able to take in several stops. The major note coming along with the fields was saturated wet conditions. K-State Agronomist Romulo Lollato commented, “The wet fields could lead to more disease pressure if conditions continue.”

Back in Manhattan the tour ended at the International Grain Building on K-State’s campus. The three-day average yield for the fields that were calculated was 47.2 bushels an acre. While an estimated 7 million acres of wheat were planted in the fall, the Kansas wheat crop varies in condition based on planting date. Wheat that was planted prior to October rains looks good while wheat planted when farmers could get back in fields after the rains is not faring as well. What Mother Nature has in plan for the wheat crop still remains unseen, but the tour captures a moment in time for the yield potential for fields across the state. Tour participants saw wheat that was significantly behind schedule, with most areas a week to 10 days behind normal development.
Many tour participants had never stepped foot in a wheat field before. These are the millers, bakers, food processors and traders who buy the wheat that Kansas farmers grow. If these fields make it to harvest, the resulting crop will go into breads, but also a number of other food items, from snack cakes to donuts to seasonings, batters and coatings for fish, chicken and appetizers.
Farmers were also in attendance so customers were able to interact with the men and women who produce the product they purchase. Gary Millershaski, a farmer from Lakin, is a wheat tour veteran who believes in the value of the opportunity to get these customers out in the field (and to get their boots a little muddy, too).
“The connections that we make on this tour are unlike anything else,” said Millershaski. “Having producers and our customers driving around in the same vehicles, there’s just a lot of information that gets shared both ways. It helps them learn about the challenges of production and the frustration of the prices we get, and we get to learn about the changing dynamics between them and their customers. It helps to put faces to the wheat they receive. We’re not a number to them after the tour… We’re real.”
The official tour projection for total production of wheat to be harvested in Kansas is 306.5 million bushels. This number is calculated based on the average of estimated predictions from tour participants who gathered information from 469 fields across the state.
Scouts reported seeing widely varying wheat conditions (due, in large part, to planting date) along the route. While there were sightings of rust and other disease in south central Kansas, many stops saw signs of nitrogen deficiency.
In addition, scouts from Nebraska and Colorado met the group in Colby, Kansas, to give reports from their states. The estimate for the Nebraska wheat crop is 47.4 million bushels, down from 49.5 million bushels last year. The estimated yield average is 44 bushels per acre. In Colorado, the estimated yield was 46.5 bushels per acre. Production in Colorado is estimated at 97.2 million bushels, up from 70.5 million bushels last year. Oklahoma reported that the state’s production is estimated at 119.27 million bushels with 37.38 bushels per acre. Approximately 4.2 million acres were seeded last fall.
Scott Foster invites Clay Patton into the studio’s to talk about his trip: http://bit.ly/2VaMZJi
© 2020 Nebraska Rural Radio Association. All rights reserved. Republishing, rebroadcasting, rewriting, redistributing prohibited. Copyright Information
Share: