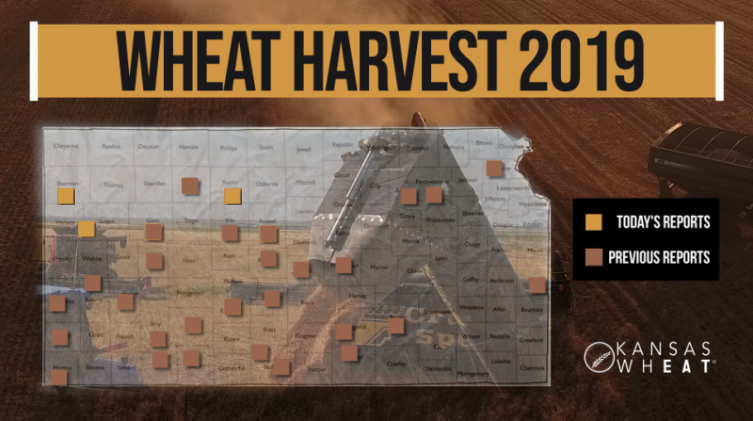 The hot, dry weekend weather was just what farmers needed to make some excellent progress on wheat harvest in Kansas.

Mike McClellan, who farms in Rooks County, is wrapping up his wheat harvest on Monday. Their harvest started on July 1, and they have seen good yields and test weights, but lower than average protein levels.

“We’ve had a really good harvest run this year,” said McClellan. “We’re pretty happy with the yields. No complaints here.” He added, “We’re ready to wrap it up.”

McClellan reports that the area is about 80-90% finished with wheat harvest.

“We’ve been pleasantly surprised on some fields, and disappointed on others,” he said. Yields have ranged from 20 on a field with hail damage to 80s on his best wheat. Test weights have remained over 60 pounds per bushel, and his proteins have been lower than average, which he partially attributes to the fact that they were late getting nitrogen on because of the moisture. He said he has neighbors who have gotten as high as 12s on protein.

Wheat harvest for Lisa Schemm, who farms in Wallace and Logan counties, got into full swing on July 10. They had started cutting on July 4, but rains kept them out of the fields until last week. A normal start date for them is June 25. A severe storm on June 22 hit some of their wheat and corn hard with hail.

Schemm reports that they are now a little over half done with harvest. She says that yields are above average, and test weights have remained well above 60, ranging from 62-63. Areas that had to be replanted aren’t yielding as well, so planting date has definitely had an effect on yields. Their protein levels have been coming in about 10.5%.

Schemm says the Kansas Wheat Alliance variety Kanmark has been performing well for them this year. She says morale is a little higher in their area, with the excellent yields and a slightly higher wheat price. Overall, wheat harvest is going well; it’s just behind schedule. She hopes to wrap up by the end of the week.

Brian Linin, a farmer from Goodland in Sherman County, started his harvest on July 8, and they’ve been rolling ever since. His wheat is yielding quite a bit above average, ranging from 70 bushels per acre and up. Test weights are 61.5 to 62 pounds per bushel, and proteins are ranging from 11.5 to 13%.

Linin says this is an above average year, with good quality wheat and good kernel size. He reports that he has about 1,200 acres left to cut, so their harvest will last about another week. The WestBred variety WB-Grainfield and a WB-Grainfield/PlainsGold Langin blend are performing well for him.

The 2019 Harvest Report is brought to you by the Kansas Wheat Commission, Kansas Association of Wheat Growers and the Kansas Grain and Feed Association. To follow along with harvest updates on Twitter, use #wheatharvest19.