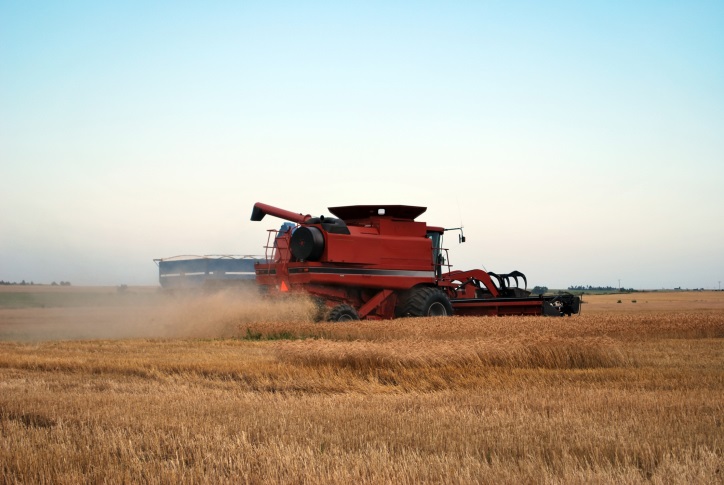 This is day 3 of the 2015 Kansas Wheat Harvest Reports, brought to you by the Kansas Wheat Commission, Kansas Association of Wheat Growers and Kansas Grain and Feed Association.

Larry Goerzen from Mid-Kansas Coop Assn. (@midkscoop), reports that their Moundridge location in McPherson County has been taking in wheat since June 11, but after a few rain delays, it really picked up on Friday, June 19, and through the weekend. He estimates that the Moundridge location has received about 20-25% of their wheat so far. Test weights are averaging about 59 pounds per bushel, and moisture has been “no problem.” Other locations where there was more rain, such as Benton in Butler County, are seeing lower test weights, while northern McPherson County and Saline County locations have better test weights.

Issues farmers are seeing continue to be a little mud in the fields and some slight weed pressure. Overall, Goerzen reports that farmers are “pleasantly surprised” with this year’s wheat.

Gary Gantz of D.E. Bondurant Grain Co in Ness County, reports that they began taking in wheat on June 17 and that test weights and yields are “all over the board” in their trade area. There is a pocket south of Ness City where wheat streak mosaic virus has devastated the crop, but the rest of the area is “decent,” with “some guys cutting their best wheat in years.”

Gantz says 2010 was the last year they had a bumper crop in their area. He reported that on April 30, nobody thought they’d be cutting wheat this year, but called this year’s crop, “miracle wheat.”

If you eliminate that southern “pocket,” yields are averaging in the 30s, while test weights range from 59.5 to 61.5 pounds per bushel. Gantz found protein level averages north of 12 ½ to be a “bit of a surprise.”

Many farmers who sprayed fungicides are seeing the return on that investment, but other producers that didn’t spray are still cutting good wheat. “Some places it made a world of difference,” Gantz said, “but there’s no rhyme or reason to it.”

Off to a good start, Kansas Wheat Commissioner David Radenberg says his harvested wheat in Barton County is a lot better than last year’s. His WB-Cedar/Armour blend is yielding about 50 bushels per acre with test weights ranging from 59 to 61 pounds per bushel. Radenberg says he started harvesting on Saturday, June 20, and has cleared out about 300 acres so far. He predicts that it will take him about a week to finish up wheat harvest.

The 2015 Harvest Report is brought to you by Kansas Wheat Commission, Kansas Association of Wheat Growers and Kansas Grain and Feed Association.