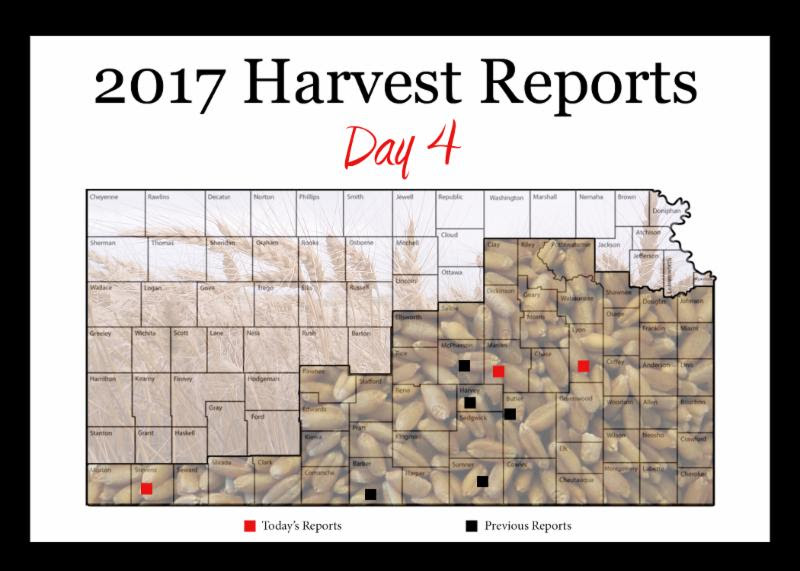 Kansas Wheat
This is day 4 of the Kansas Wheat Harvest Reports, brought to you by the Kansas Wheat Commission, Kansas Association of Wheat Growers and the Kansas Grain and Feed Association.
Mother Nature decided to hit pause on the Kansas wheat harvest with brief showers across the state. Fortunately for many western and central Kansas farmers, combines only came to a stop for a brief interlude as the hot sun quickly dried fields off. Humidity has kept some harvest crews out of the fields in the eastern portion of the state, but they are expecting to roll on Thursday.
Derek Klingenberg, Peabody, reported that much of his harvest is already done.
“We saw reduced wheat acres in this area,” said Klingenberg. “It’s been a good one, and so far, with the exception of these showers, it was really good harvest weather.”
Klingenberg reported good kernel characteristics and test weights ranging from 62 to 65.3 pounds per bushel. Yields have also been above average with a range of 55 to over 60 bushels an acre.
Jacquelyne Leffler, a farmer from Americus in Lyon County, said that Wednesday’s humidity had combines in her operation stopped. She started harvesting on Sunday and said she’s expecting to cut for another two weeks.
Leffler said that yields have been in the low 60s, and her test weights have averaged out to 62 pounds per bushel.
“It’s nice to see our yields that high and we had a good growth, but we’re excited to be able to get into the ‘good stuff’ and see how yields perform there,” said Leffler. “We just wish that we could see higher commodity prices to go along with it.”
Terry Mohl, manager of the United Prairie Ag branches in Hugoton, reported that harvest in his area started Tuesday. So far he reports that the wheat he has seen looks ‘fair.’
“Our proteins reached 11.6 yesterday,” said Mohl. “It dipped a little today to around 11, but we’re just getting started around here.”
Mohl said harvest has started in the area, but it’s difficult to have an end in sight.
“This isn’t going to be a fast harvest,” said Mohl. “This is going to be moderate speed drawn out over a long period of time due to maturity. There’s still a little bit of green in a lot of these fields, so it’ll be a while before a lot of it gets harvested.”
The 2017 Harvest Report is brought to you by the Kansas Wheat Commission, Kansas Association of Wheat Growers and the Kansas Grain and Feed Association. For exclusive #wheatharvest17 content, please head to facebook.com/kansaswheat.
© 2020 Nebraska Rural Radio Association. All rights reserved. Republishing, rebroadcasting, rewriting, redistributing prohibited. Copyright Information
Share: