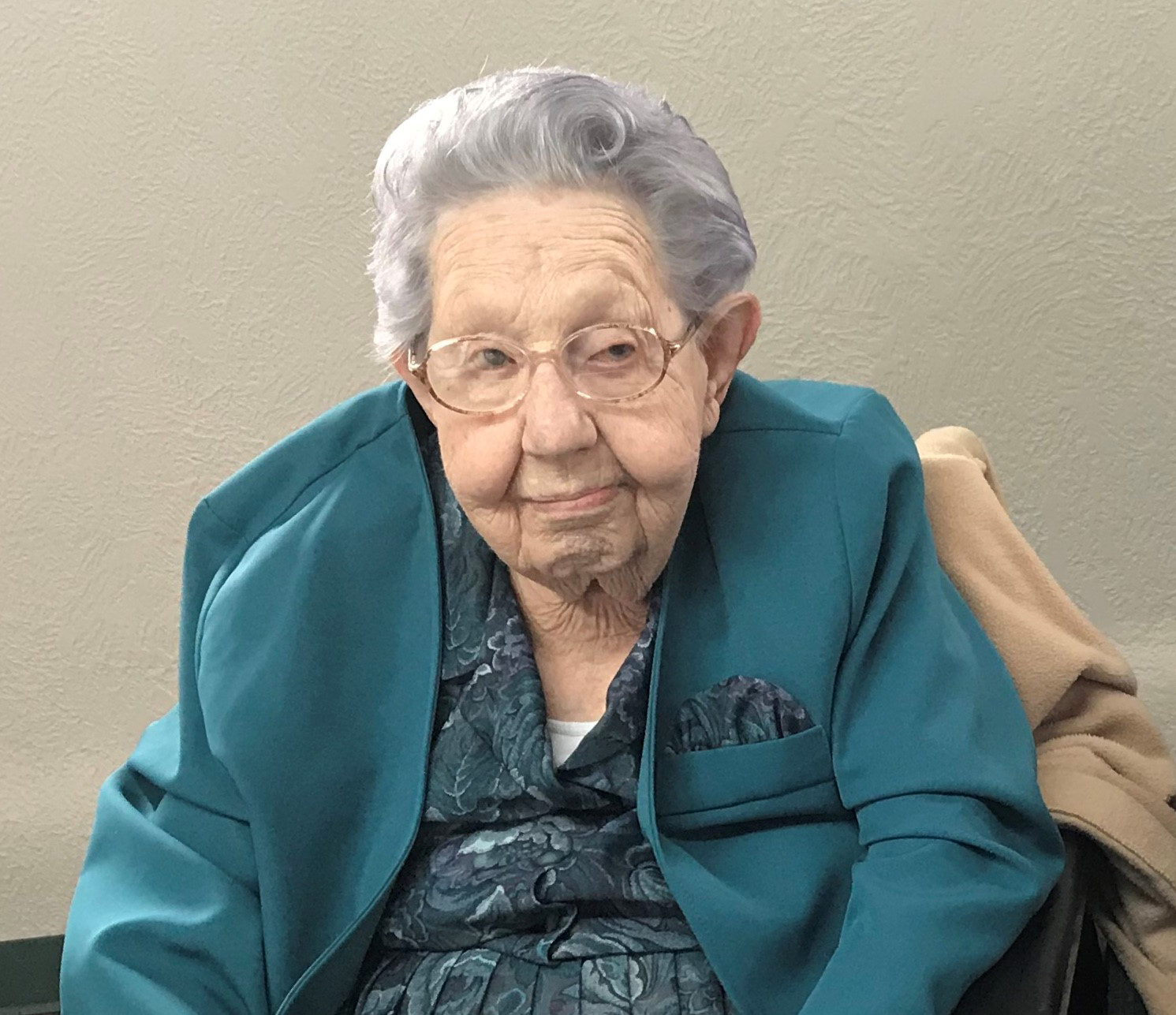 Berniece Rhinehart, age 100, of Arapahoe passed away July 7, 2020 at C.A. Mues Good Samaritan Center. Berniece Adeline (Thomas) Rhinehart was born on June 10, 1920. Berniece was the 3rd of 5 children born to Lewis Guild Thomas and Mabel Sophia (Holst) Thomas. Berniece was born in Gosper County on a farm Southwest of Elwood.

Berniece’s mother was a homemaker and her father was a farmer. They lived on the farm until her mother passed away when she was 4 years old. After her mom’s passing, Berniece and her siblings went to live with her Aunt Nina and Carey Bratt in Hayes Center, Nebraska. Berniece and her siblings attended school there until her father moved the family back to Arapahoe in 1928. They lived on a farm south of Arapahoe at the bottom of the Big Bluffs. Berniece attended country school until the 8th grade before attending Arapahoe High School.

Berniece met Donald Oliver Rhinehart while Don was working for her dad on the farm. She dated Don for about a year before they married on February 24, 1946. They were married in Norton, Kansas at the judge’s house. After they were married they made their home in Elwood, NE. To this union a son was born, Jimmy Dean Rhinehart. Jim was raised in the Elwood house and attended grade school and high school in Elwood, NE.

Berniece had many jobs during her career. One of her first jobs was driving a bus for handicap kids in Cozad. She also worked at Beckton Dickinson in Holdrege for a few months before going to Overton to work at Plectron. She also worked as a Janitor for the Elwood Public School and did housework for people around town.

She really enjoyed being close to her 4 grandchildren (Heather, Gwen, Kevin & Scott) as they were growing up. She would spend time helping out on the farm doing chores and dressing chickens. When her grandkids were in the Gosper County fair, they would come stay with her and she would make them breakfast before heading out to the fairgrounds. A lot of times her grandkids would help her clean houses in the summertime.

Berniece was involved in church groups and card groups. Some of the things she enjoyed doing were playing bridge, pinochle and sewing. She enjoyed teaching her grandchildren how to sew using plastic canvas.

In 1998, Berniece moved to Sunshine Village in Arapahoe where she lived until she moved to the Assisted Living at Good Samaritan Society in Arapahoe. She enjoyed talking with friends and neighbors and loved having coffee and putting puzzles together and playing chicken foot with the residents. She made a lot of friends and enjoyed spending time talking to anyone.

Berniece has been an inspiration to all of us and we are grateful for all the memories we have shared through her 100 years. She will greatly be missed by all of her family and friends.

Viewing and visitation will be Monday, July 13, 2020 from 4 PM to 8 PM at Wenburg Funeral Chapel, 652 Main St, Arapahoe, Nebraska and prior to the service at the church. Funeral services will be Tuesday, July 14, 2020 at 10:30 AM at the First United Methodist Church with Pastor Becky Saddler, officiating.

Interment will be at the Elwood Cemetery immediately following the service.

Lunch will be provided at the First United Methodist Church immediately following the interment.

Wenburg Funeral Home of Arapahoe, Nebraska is in charge of the arrangements. Condolences or personal reflections can be left at wenburgfuneralhome.com