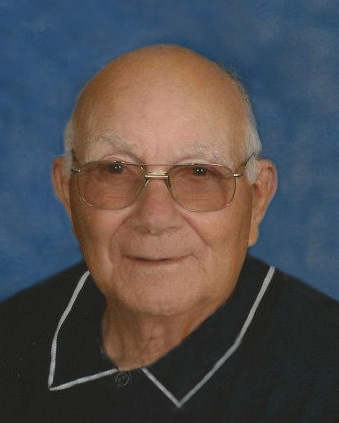 Funeral Services for Lloyd R. Foster will be held on Thursday, July 9, 2020, at 3:00 p.m. at the North Park Assembly of God Church in Holdrege, Nebraska with Pastor Brian Steinbach and Chaplain Kathy Doiel officiating. Interment will follow at the Fridhem Cemetery at Funk, Nebraska with military rites provided by the Martin-Horn American Legion Post #66 in conjunction with the United States Marines Corps Honors Team. Lloyd’s funeral will be live-streamed at the North Park Assembly Facebook Page.

Due to health concerns, regarding the COVID-19 pandemic; current CDC and Nebraska Department of Health and Human Services guidelines for Faith-Based Services and Gatherings will be followed. The Foster family sincerely encourages each person to make their decision whether to attend Lloyd’s services, based on the best interest of your health, and that of your community.

Lloyd Ray Foster, 90 years of age, of Holdrege, passed away on Saturday, July 4, 2020, at Holdrege Memorial Homes. Lloyd was born April 5, 1930, in Cambridge, Nebraska, the eldest of fourteen children to Ray Otis and Marie Ann (Rhoades) Foster. He received his primary education from Cambridge, Arapahoe, and Holbrook, and then completed his education at Holbrook High School.

On November 22, 1952, Lloyd was inducted into the United States Marines Corps and served his country during the Korean Conflict until his honorable discharge on February 11, 1958.

Following his education, he was united in marriage to Marjorie Elaine Beebe. This union was blessed with ten children: Judy, Rose Ann, David, Gloria, Cathy, Dale, Cindy, Daniel, Tina, and Robert. Lloyd was employed as a truck driver for Zip Transfer in McCook, Nebraska, and then for Ray Biber at Biber Truck Line in Benkelman, Nebraska, before the family settled to Holdrege. Lloyd was then employed at Speedway Trucking for 9 years, and then for Phelps County Department of Roads as a maintainer. He then returned to Speedway for another 17 years until his retirement in 1995. Following retirement, Lloyd enjoyed working part-time for Phelps County, mowing in the summers. On December 25, 2018, he was preceded in death by his wife, Marj.

Lloyd was a longtime member of the North Park Assembly of God Church in Holdrege. He was also a past member of the Martin-Horn American Legion Post #66 in Holdrege and the National Rifle Association. Lloyd was an avid outdoorsman, who loved camping, fishing and hunting.

A memorial has been established in Lloyd’s honor, and kindly suggested to the family for later designation.

The Nelson-Bauer Funeral Home in Holdrege is in charge of the arrangements.