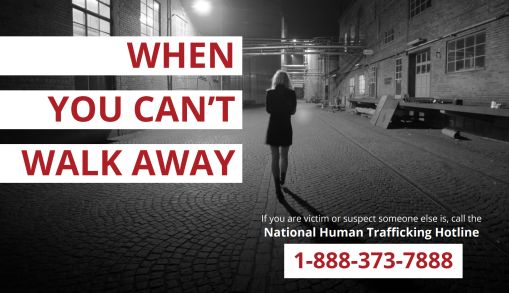 Lincoln–Governor Pete Ricketts and Attorney General Doug Peterson in partnership with the Nebraska Department of Transportation have worked to bring a new important message of help to the I-80 corridor. Every rest area across Nebraska now displays a poster targeted at reaching both victims of human trafficking and those who suspect human trafficking.

The “When You Can’t Walk Away” message is inspired by the Blue Campaign, developed through the Department of Homeland Security. The black and white poster with bold red lettering depicts a lone person walking down an alley away from view. The message reads two ways: when a person is being coerced and cannot walk away from their perpetrator and when a bystander sees something, and they cannot walk away without reporting.

The poster provides the National Human Trafficking Hotline number: 1-888-373-7888, which is available to receive calls 24 hours a day, seven days a week, 365 days a year. The hotline funnels calls to the in-state network established by the Nebraska Human Trafficking Task Force (NHTTF). Help is available in English, Spanish, and more than 200 additional languages through an on-call interpreter.

As hard as it may be to believe, human beings are trafficked in Nebraska–being bought and sold and treated as property, forced against their will to work for those who think they own them. This modern-day slavery is illegal, yet it can thrive in the shadows, even in Nebraska, because we don’t see it.

It was only in the last decade that many began to understand the scope of this particular crime. And now through partnerships across our state, Nebraska has experienced considerable momentum in working to stop trafficking. We have clearer, tougher laws against human trafficking and several new laws to protect the victims/survivors.

To see or download the poster, visit ago.nebraska.gov. It is available to be displayed in churches, schools, hospitals, apartment buildings, or place of business.