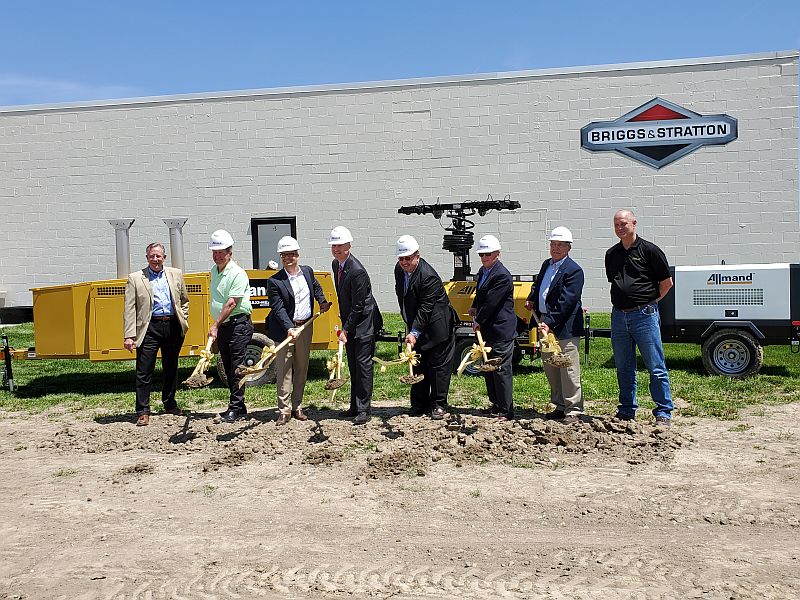 RRN/ Ground was broken Thursday May 16, 2019 on a new 78,000 square-foot addition to be built onto the Allmand plant in Holdrege.

Allmand Bros. Inc., a subsidiary of Briggs & Stratton Corporation and a manufacturer of high-performance portable job site equipment, has broken ground on the expansion of its existing facility in Holdrege, NE, to increase production capacity and speed-to-market with new innovations.

The Allmand team was joined by Governor Pete Ricketts of Nebraska, Holdrege Mayor Doug Young, the Phelps County Development Corporation, the Nebraska Economic Development Corporation, Holdrege City Commissioners, the Phelps County Commissioners, local government officials and the community to celebrate the official groundbreaking of the expansion and discuss the efforts being taken to hire for approximately 20 new positions, beginning with a job fair on June 5.

“This expansion aligns with Briggs & Stratton’s focus on growing its commercial business,” says Tom Rugg, vice president and president of job site & standby at Briggs & Stratton. “Over the last five years, the Company has grown commercial sales by more than 70 percent and the Allmand business plays an important role in continuing this growth.”

“Allmand has been creating high-quality manufacturing jobs and contributing to the Nebraska economy for over eight decades,” said Gov. Ricketts. “This expansion will help the company spur additional growth, creating even more great job opportunities for families in Holdrege.”

Allmand designs and manufactures portable jobsite equipment including light towers, generators, compressors, heaters, and portable lights. The company began in Huntley, Nebraska in 1938 and has been based in Holdrege since 1948. It was acquired by the Milwaukee-based Briggs & Stratton Corporation in 2014, and continues to strengthen its Nebraska roots with new growth.

Allmand announced plans to expand its Holdrege plant last December. The project, expected to be completed this year, will facilitate an increase in production capacity, innovation, and speed to market. It includes five new assembly lines, a prototyping lab, a new paint system and robotic weld cells, and enhanced technological infrastructure. The expansion will create around 20 jobs.

Addressing the audience, Governor Ricketts congratulated Allmand on its growth, while thanking the company for contributing manufacturing jobs and Nebraska-made innovation to the state’s economy. Manufacturing firms presently employ over 97,000 Nebraskans, and offer competitive wages and a strong occupational outlook. A recent economic analysis report by SRI International listed manufacturing as a high-growth industry poised to create opportunity for the current and future workforce.

“We’re pleased to see a great Nebraska company continue to succeed and grow our state’s manufacturing sector,” said DED Director Dave Rippe. “We also appreciate the partnerships that went into supporting Allmand’s expansion. But it’s really our state’s talented workforce that makes events like today possible. Our congratulations go out to Allmand, as well as the people of Holdrege, for today’s achievement.”

The expansion includes five new assembly lines, a prototyping lab, a new paint system and robotic weld cells, and enhanced technology infrastructure, and is expected to be completed at the end of calendar year 2019. The new features to the building as well as increased capacity will position Allmand to meet the needs of customers in the oil & gas, construction and rental industries.

The expansion will add 20 new jobs to support further growth of the Allmand business and build on its existing foundation of superior products, services and workmanship. To fill these roles, Allmand will host a series of job fairs, with the first taking place on June 5 from 4 to 7 p.m. at the Allmand facility, 1502 W. 4th Ave. Holdrege, NE.

“Employees are our greatest asset,” says Rugg. “Our employees and the work that they do is what has made Allmand successful for the last 80 years, and we look forward to welcoming others to this great team.”

For more information and to apply, visit careers.basco.com and find job openings in Holdrege for opportunities at the Allmand plant.