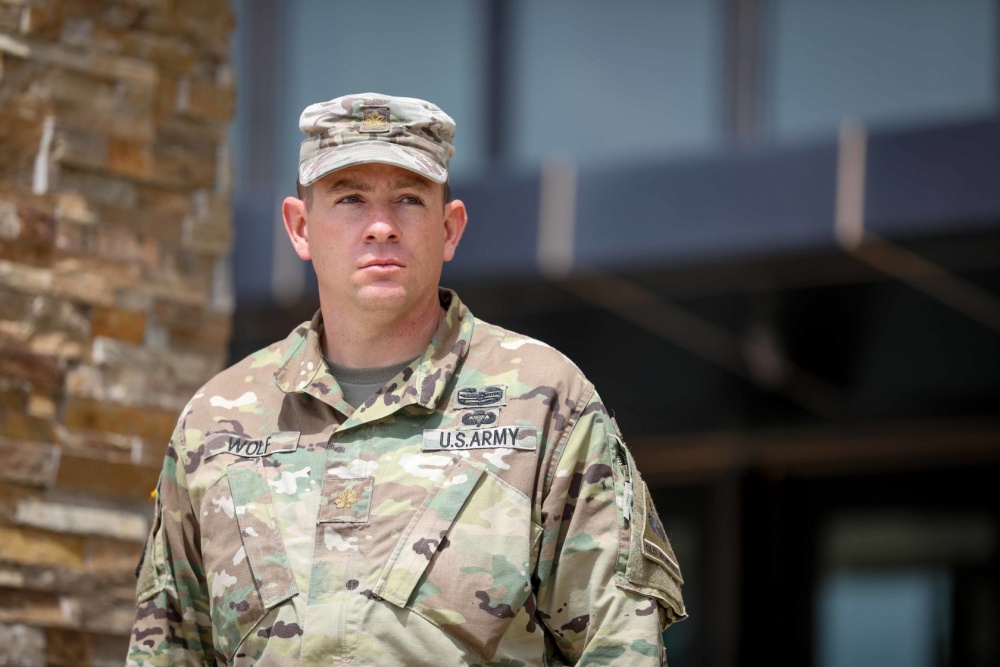 An unexpected hero in the COVID-19 pandemic hails from a specialty that few outside the Army knew existed: The 1st Armored Division’s Operations Research and Systems Analysis officer, or ORSA.

Maj. Evan Wolf, a Cozad, Nebraska native, and University of Texas-El Paso Alumni, created a progression rate model for Fort Bliss leadership in the early stages of the COVID-19 pandemic. His model was used to assist the City of El Paso while their task force was developing one suited to their unique needs.

To hear from Maj. Wolf and his conversation with the Rural Radio Network’s Austin Jacobsen, click here.

Reviewing the data from across the borderland and Juarez, Mexico, along with trends across the DoD, Wolf enabled Fort Bliss leadership to use the model to analyze trends for its own response efforts, and the additional needs that William Beaumont Army Medical Center may expect in the weeks and months ahead.

“Medical modeling is critical to save lives as part of predictive analysis. It helps us make decisions, and forecast usage for things like ICU beds and ventilators, and predict when we might exceed a capacity point,” said Derrick Washington, Interim Director of Directorate of Plans, Training, Mobilization and Security (DPTMS) for the garrison at Fort Bliss, and the Chief, Installation Plans and Operations. “Fort Bliss used Maj. Wolf’s model as a consideration in making our COVID-19 response decisions, among them was the command’s decision to go to more stringent protection measures early-on to protect the force.”

Both Acting Senior Commander Brig. Gen. Matthew Eichburg and Washington recognized that Wolf’s model might be helpful to the city of El Paso leadership, who was starting to create their own.

When asked how it feels to help his community during a time like this, he said it was inspiring and unexpected.

“Its kind of humbling. Considering all the models there are online, and how many state experts there are, I didn’t really expect my model to go to that level. I was happy that it was useful at the division level, but I was kind of shocked when there were discussions that they wanted to share it with the city,” Wolf said.

The collaboration and means to improve his model after talking to Army Medical experts and experts from the city of El Paso was very rewarding to Wolf, as his analysis on the pandemic is far from over.

“Being able to have the different perspectives from William Beaumont Army Medical Center, El Paso’s medical experts present, their planning professionals; they had a lot of considerations to include. It was great to bring in different perspectives and be able to sharp shoot how the model was built and what parameters were used,” said Wolf. “It helped keep what I’m building honest and make sure it’s as accurate as possible based on the number of unknowns surrounding COVID-19.”

Fort Bliss and El Paso have a long history of collaboration.

“This installation doesn’t turn into a separate entity from the community – we have a very team-centric relationship and it shows. It means a lot to know that we always have a seat at the city’s emergency management center, and to share advances with the city whenever we can. It doesn’t feel like a city and a separate post, it feels like a team,” said Washington.

ORSAs, known as functional area 49 officers, serve around the world in organization levels like unified combatant commands, Army service component commands, division headquarters, Army analytical organizations, and the Department of the Army. ORSAs are uniquely skilled officers – problem solvers – who produce analysis and decision support products to underpin critical decisions by leaders and managers at all levels of the Department of Defense (DoD).

Graduating from Cozad High School in 2002, Wolf commissioned as a combat engineer at the United States Military Academy at West Point in 2006 with a bachelor’s degree in civil engineering. He has a master’s degree in engineering management from Missouri School of Science and Technology (2011) and a Ph.D. from University of Texas-El Paso in civil engineering (2018). Research is something Wolf is passionate about and he aspires to someday serve at the U.S Army Engineer Research and Development Center, or ERDC.

“I am very detailed-oriented,” said Wolf. “I like to look at the details of things and the ability to support the mission from that aspect. I was drawn to FA 49 because of a lot of the opportunities for professional development and training to make sure we’re relevant on what’s going on, be it online or opportunities to go to schools.”

Before he was focused on forecasting for the COVID-19 pandemic response, as the 1AD ORSA, Wolf used data to recommend potential solutions for complex strategic, operational, tactical, and business issues and helped advise on paths leadership could choose to organize, man, train, equip, sustain, and resource its force.

Some of the projects he has supported included analysis for the division’s Supply Support Activity operations to ‘right-size’ what level of support is needed to gain efficiencies or to reduce or resolve potential backlogs. He has also provided forecasting regarding certain military occupational specialties.

“I look at what people need and where I can see a way to help them,” said Wolf. “For instance, it might be a quick study of 68W’s, or combat medic specialists, for the division’s surgeon cell to help frame recommendations on retention and training that will provide a readiness forecast for them. Or, I’ve also looked at other military occupational specialties and missions, to ensure we are on the right track or where we are short, or to potentially inform on unit-maintained equipment (UME) contracts, where there may be risk if we don’t have those pieces,” Wolf said.

Wolf has spent the greater part of the last six years in El Paso and continues to be impressed with the partnership between the 1AD, Fort Bliss, the El Paso community and city leadership.

“Understanding when I built the model from scratch, it wasn’t going to be perfect because no model is,” said Wolf. “In talking to the city experts, the more I had to explain it to others, it made me more aware of what’s going on with it. A lot of good came out of our coordination; just talking the model with them demonstrates the bond between the post and community. We’re our own entities, but we work as one,” he said.