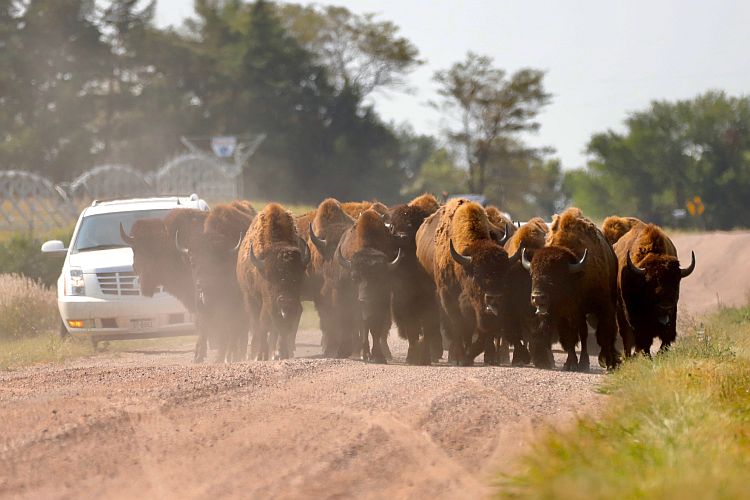 RRN/ A herd of Bison from a feedyard is roaming the Phelps County countryside on Wednesday August 26, 2020. (Paul Pack/ KRVN Radio)

Law enforcement, feedlot personnel and other volunteers have had limited success in rounding up about 125 head of bison that escaped a rural Overton feedlot sometime overnight Tuesday.

The escape was discovered around 5:00am Wednesday when a semi struck at least two on Highway 23 near Loomis. Phelps County Sheriff Gene Samuelson says the bison have broken off into smaller groups and spread out across the county.

There’s no warning when the bison come out of cornfields and onto the roadways. Sh. Samuelson says “there’ll will be two to three head that are coming out of cornfields and wanting to move south, southwest and horses can’t stop ’em, four-wheelers can’t stop ’em, I don’t know what it’s going to take to stop ’em. My hopes are they get into some pastures down there and they calm down and then maybe some plans can be made.”

Their strategy has been to herd them into pens. A number of people worked to get a group into a strong, structure corral but, “have not had any success” in getting any bison in there. Sheriff Samuelson says about 10 to 15 head were captured at a feedlot southwest of Loomis, another 20 to 25 head were in a pasture about 8 miles south of Loomis. About 20 head had crossed over into Gosper County southwest of Bertrand.

Five of the herd were struck and killed in three separate vehicle accidents. There have been no reports of human injuries. Cowboys with horses that would like to help assist with the roundup are asked to contact Valley View Feeders feedlot by texting to 308-325-7692. People who spot bison are asked to call in locations to the Phelps County Sheriff’s Office at 308-995-5692 during 8:00am to 5:00 pm or contact dispatcher located at the Holdrege Police Department after hours 308-995-4407. One or two airplanes have also assisted with spotting bison locations.

The Sheriff’s Office asks motorists to be careful and slow down if you as they drive through the area and be alert to the potential of bison being in or near the roadways. The Sheriff’s Office also advises that you should not get out of your vehicles and attempt to approach the bison.