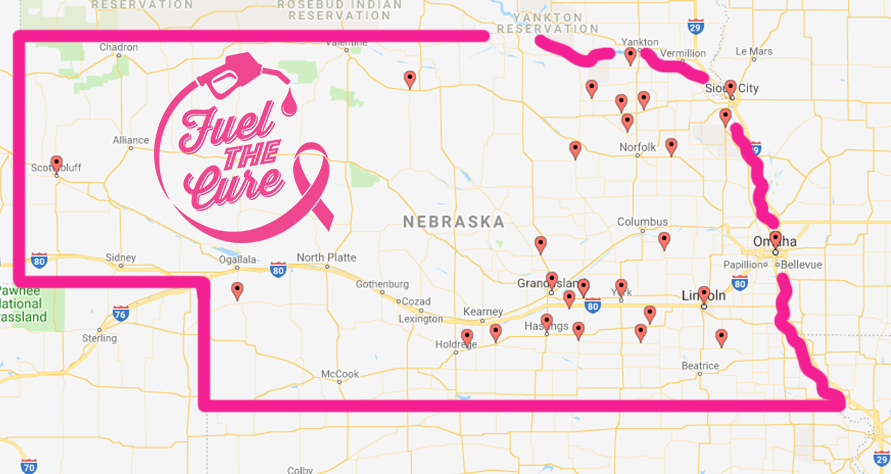 Throughout October, drivers can help Fuel the Cure for breast cancer by choosing American Ethanol at the pump. More than 30 Nebraska gas stations will donate 3 cents for every gallon of higher ethanol blends – E15 to flex fuel E85 – sold between October 1­‑­October 31. All donations will support cancer research at the Fred & Pamela Buffett Cancer Center in Omaha.

Why support this important cause?

Chemicals in gasoline are known to cause cancer. Higher blends of biofuels dilute the toxicity and helps reduce cancer-causing emissions. Last year’s campaign raised more than $6,000.

”Cancer touches the lives of nearly everyone in some way,” said Ashley Christensen, Director of Development, Fred & Pamela Buffett Cancer. “We appreciate that Nebraska fuel retailers are joining forces to empower drivers to support cancer research at the Fred and Pamela Buffett Cancer Center, which provides life-saving care to people throughout our state. With donors like yourself, we are able to fund researchers working on new treatments each and every day.”

For a complete list of participating fuel retailers, please visit www.fuelthecure.pink. Drivers will be able to identify which retailers are supporting this important cause by looking for pink signage at the pump, on the windows, and at the counter.

“The Fuel the Cure program has been a tremendous partnership between Nebraska’s ethanol industry and the Fred & Pamela Buffett Cancer Center,” said David Bruntz, chairman of the Nebraska Corn Board and farmer from Friend. “Ethanol blends already help clean up our air from toxic, cancer-causing chemicals emitted from burning traditional gasoline, but throughout the month, you can make an even bigger impact by using higher ethanol blends to support breast cancer research. Ethanol benefits our health, our environment, our engines and our wallets.”

The Nebraska Corn Board and Nebraska Ethanol Board, along with Renewable Fuels Nebraska, sponsor Fuel the Cure in conjunction with retail stations.