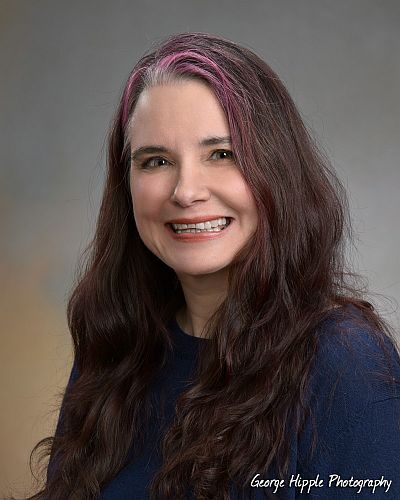 When Wendi Stover steps up to the podium May 10 as the North Platte Community College student commencement speaker, she will do more than accomplish a goal.

She will give back to NPCC in return for everything the college has given to her – specifically the healing it brought to her life.

“Coming to NPCC tops the list of best decisions I’ve ever made,” said Stover. “I’m looking forward to being an alum. I will always promote this college.”

Stover’s decision to enroll in NPCC in the spring of 2017 was born from personal struggle, but it was a step she felt she needed to take to turn her life around.

College wasn’t her top priority when she graduated from North Platte High School in 1989. Instead, Stover joined the U.S. Army Reserve and shipped off for basic training.

It wasn’t a surprising move, considering Stover came from a military family. Her father and grandfather were both marines, and she had an uncle in the army.

“I was also influenced by my older brother, who went straight into the military after he graduated, and a friend in high school who had been through basic training and made it sound really interesting,” said Stover. “I considered active duty, but we never saw my brother. The thought of being away from my family all the time wasn’t appealing, so the reserves sounded like a better option.”

Following eight weeks of basics, Stover enrolled in classes at the University of Nebraska at Kearney.

“It seemed like the thing to do at the time, but I really wasn’t ready for college, nor did I have the mindset for college,” Stover said. “I dropped out after the first semester.”

Stover didn’t have time to contemplate her next move before she was deployed to Germany as part of Operation Desert Storm.

“That was when they still utilized reservists to fill positions for active duty personnel when active duty was mobilized,” Stover said. “The unit we were filling in for had to go to Iraq, so we spent eight out of 10 months in Germany. That unleashed in me a need for travel and new experiences and took away my fears of being away from family. It opened my eyes to the rest of the world and lit a fire in me to be someone who traveled and did amazing things.”

“I went one more semester at UNK, but still wasn’t into it,” Stover said. “I couldn’t concentrate. It wouldn’t have mattered if I had gone to Germany or not. I just wasn’t ready. My first major was theater, then, when I got back from Germany, I switched to psychology. I was all over the place. Not knowing what I wanted to do took all the fun and desire out of going to college.”

Drawing on her military experience, she spent the next 14 years working as a helicopter dispatcher – initially in Kearney then in Colorado. Stover also spent some time at a Kearney print shop before being deployed again in 2004.

During that activation, she spent four months in Kansas at Fort Riley, living in a helicopter hanger with the National Guard. She followed that up with a 10-month stint in Kuwait.

It took a return to U.S. soil and another decade of dispatching in Omaha before Stover began to seriously consider college again.

A turn for the worse

Stover did manage to fit in a couple night classes at the University of Nebraska Omaha before she was promoted to an operational control center in Colorado. There, she was assigned a pilot schedule: four 12-hour day shifts, four days off, four 12-hour night shifts. The stress took a toll.

“Something went wrong in Colorado,” Stover said. “I wasn’t doing well mentally. I started having seizures in my sleep, and one day, everything just crashed. I had a major breakdown.”

The year was 2012. Stover had been diagnosed with depression years before, at age 25, but had always been compliant with her medication. That all changed in Colorado.

“My folks had to drive out to Denver to get me,” Stover said. “I was having panic attacks and seizures, and my depression was at the lowest it had ever been. I was not in a good place. I was in and out of the behavioral unit and out-patient therapy and had to live with my parents because I wasn’t capable of living on my own.”

She was placed on disability, tried to return to her old job in Omaha, had another breakdown and was forced to move back to North Platte. That was followed by a third breakdown.

“It wasn’t quite paranoia, but I would hide from customers in the store I was working at because it gave me so much anxiety to have to deal with people,” Stover said. “Again, I was put on disability, and in July of 2015, I planned a suicide attempt.”

She gathered all the medications she could find from her parents’ house and put them in her bag. While her family went to Kearney for the Fourth of July, Stover planned to stay home and end her life.

“My therapist must have sensed something was up,” Stover said. “After she found out I wasn’t going to be with family over the holiday, she started asking me questions about my nieces and nephews. That clicked something somewhere. I told her what my plan was and that I had the pills on me. Immediately, I got put back into the behavioral health unit.”

“There was something about that period that made me decide, ‘This time it has to work because I don’t want to live like this anymore’,” Stover said. “I had let my mental illness have the wheel for way too long.”

She pushed herself to glean everything she could from her therapy sessions and to develop the skills presented. Eventually, she came out on top.

“In 2016, I decided I was going to do what I always wanted to do and set the wheels in motion to get a job that would allow me to travel,” Stover said. “I went to Chile for a month and came back with a Teaching English as a Foreign Language certification. I then realized that if I wanted to be able to travel to the places I wanted to travel to, I would need a bachelor’s degree.”

With a 4.0 grade point average on her transcripts, Stover had options. She could easily go back to UNK or UNO, but instead, she turned to NPCC.

“I decided to scrap everything and start over,” Stover said. “I felt like I needed to because I was opening a completely new chapter in my life. I wanted to put those unsuccessful attempts at college behind me and start fresh.”

There were other reasons for wanting to stay in North Platte as well. Doing so, allowed Stover to keep her family nearby for a support system, and NPCC’s small campuses and class sizes weren’t as intimidating as those of larger schools.

Once Stover made up her mind to return to college, she threw herself into the full experience.

In addition to serving as president of the drama club, Stover was also a student ambassador and co-president of the Alpha Beta Theta chapter of the Phi Theta Kappa Honor Society. She was a charter member of the Rho Zeta chapter of the Sigma Kappa Delta English Honor Society, an active supporter of NPCC athletics, a common sight in theatrical productions and a tutor for her friends.

“I joined as many organizations as I could,” Stover said. “I believe that the more involved you are in extracurricular activities, the more successful you will be. I also wanted to reflect the pride I have in NPCC through my actions. When people looked at me or talked to me, I wanted to be able to show them everything NPCC has to offer. I’ve had a wonderful experience.”

Stover felt her mood and confidence boosting the more involved that she became, but she faced some challenges along the way.

“Initially, I was afraid that I was going to give up, or that my mental illness would get in the way of my dreams,” Stover said. “There were times when depression would settle in, and I wouldn’t have the desire to do homework or come to class, but those were the days when my instructors would call to see if I was OK. That was amazing to me.”

It also changed her focus. Suddenly, Stover had someone else to fight for.

“It was important for me to be successful because I didn’t want to let my instructors down,” Stover said. “I appreciated that they took the time to get to know me as a person. I had never had educators like that who were just as invested in my success as I was. I think that’s important for a college because if students thinks nobody cares, it’s easy for them not to care. I’ve never once felt like my educators at NPCC didn’t care if I passed a class.”

Stover will graduate from NPCC with an Associate of Arts degree. Her plan is to transfer to Nebraska Wesleyan University, in Lincoln, to study modern languages. She intends to focus on Japanese and is considering a minor in German or global studies.

Ideally, Stover would like to be accepted into Wesleyan’s Japanese Exchange and Teaching Program. Students in the program teach English in Japanese schools or work in Japanese communities on international exchange activities.

“Teaching English to Japanese students is my end goal,” Stover said. “I will have to remain successful to do that. NPCC has given me all the tools and support I need, and a lot of healing has happened during my time here. I still deal with anxiety and depression, but now I have better control over it. It’s been a long journey to get to the point I’m at, but I finally feel like I’m prepared for the next step.”