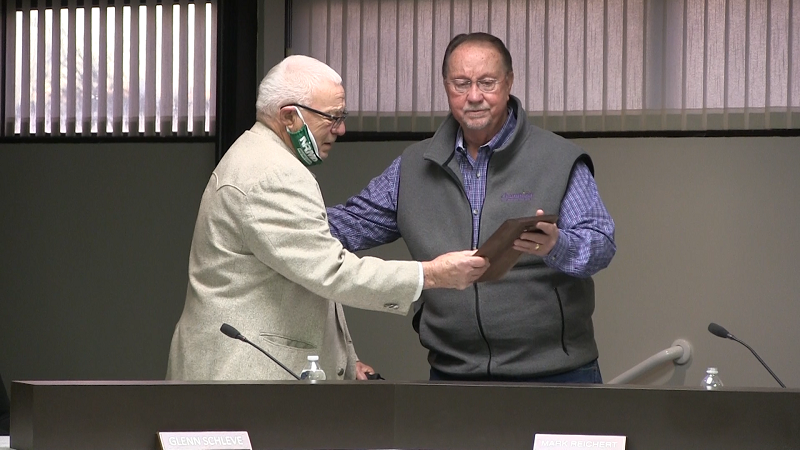 Scottsbluff County Commissioners thanked an outgoing member of the body for his service the past four years Monday night, then ultimately approved paying their portion of a maintenance contract for a river gauge used to monitor for local flood conditions.

Chair Ken Meyer presented a plaque to Glenn Schleve on his last meeting on the board, thanking Schleve’s family for letting them have him over the past several years, and while each member of the board may represent a district, each works for the whole county and Schleve was no exception. “Glenn took on a lot, and he did a great job. He was vice-chair here, and a great partner to work with. We were on the phone a lot, discussed a lot of things,” said Meyer. “As a fellow commissioner, vice-chair and a good friend, I’m going to miss you, I want you to relax… and I’ll probably call you and ask your advice on things.”

Following the presentation, the board spent the better part of half an hour discussing the maintenance contract for the river flow gauge on the Avenue I bridge that provides real-time data flood data. It was the same agreement rejected a week ago, however in this case, it had been amended so the city of Gering would receive payments from the county, Scottsbluff and Terrytown and forward them to the U.S. Geological Survey, which maintains the equipment.

The county’s portion of the contract is $525 a year, the same as Terrytown, with Scottsbluff and Gering splitting the remainder that’s not paid by USGS.

Commissioners voted 3 to 2 in favor of the amended agreement, with Charlie Knapper and Mark Reichert voting against.