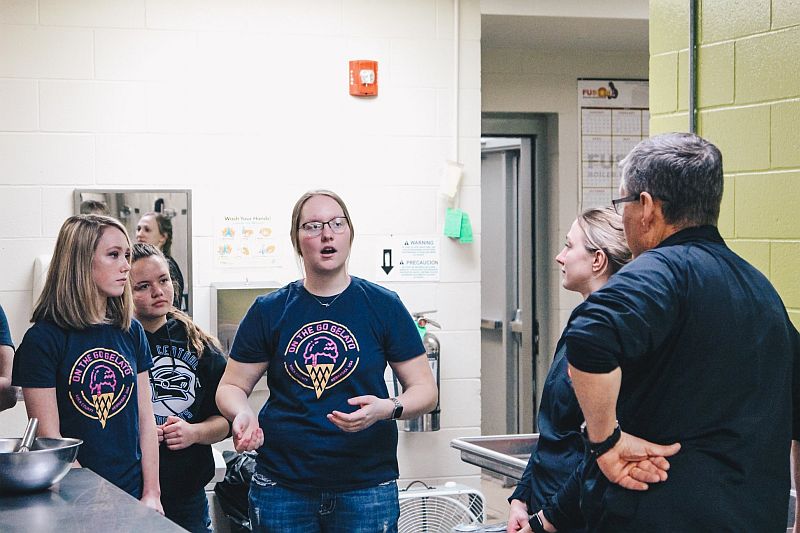 From left to right, Jillian Buell, Karley Anderson and Jaya Nelson, along with Hannah Esch, a UNL student, visit with Tom Fields, an Engler Agribusiness Entrepreneurship advisor, about their business, On the Go Gelato. Photo courtesy Jaya Nelson.

Not just eating it, but making and selling it, too.

The Nebraska High School Rodeo Association member is part of a team of four high school students who have established a school-based business called “On the Go Gelato.”

The business is part of the program through Nebraska FFA with assistance from the Engler Agribusiness Entrepreneurship program at the University of Nebraska-Lincoln. The teenage business owners have developed their own gelato flavors and make and sell the gelato at various locations in Rock County High School in Bassett, around town, and at events.

Nelson, along with classmates Karley Anderson, Jillian Buell, and Grace Olson, began their venture last September, under the guidance of their FFA advisor Mrs. Ann Dvorak. They make it in the school kitchen from milk, eggs, cream, sugar, and flavoring, and sell it on Fridays at school to students. They’ve had requests for catering at area businesses, like vineyards, banks, and birthday parties. They’ll be at the Ranch Expo held in Bassett June 19-20, and were on hand at the Shark Tank filming in Lincoln, where they served gelato and made a pitch to the “sharks.”

Nelson estimates she and her business partners average about ten hours a week working on their business, before and after school. During busy weeks, it might be twenty hours. Between school, studies, and rodeo practice, it makes for long days. She’s learned to manage her time better than she thought she could. “I’ve always been decent at time management,” she said,” but it’s crazy trying to juggle school, a job and rodeo.”

She’s done well with all three facets: she’s on the honor roll at Rock Co. High School and is ranked in the top ten in the breakaway roping. She also team ropes.

The business has done well, too. The young women have made a gross profit of $5,000 since they started last fall and have the goal of doubling that by this September. The profit goes back into the business, and since it’s a school-based business, any money they earn from the hours they work is held by the school in a scholarship fund, to be given to them when they graduate. They have two options when they’re done with high school: to buy the business from the school, or pass it on to other students.

A lot of people didn’t take the four women seriously when they started. “There are not many sixteen year old entrepreneurs running a business,” she said. “We had our fair share of naysayers and inspectors.” But that didn’t set them back. “It sets a fire under you when somebody says you can’t do something,” Nelson said. “It drives you to do it and prove them wrong.”

They’ve come up with a motto: dishing out girl power, and they plan on blogging about their struggles. “Being teenage girls, starting a business, we want to show other students that you can do this just like we are,” Nelson said.

The first high school rodeo for the 2020-2021 season is in Bassett, and the On the Go Gelato businesswomen would like to sell gelato at the rodeo. And the National High School Finals Rodeo comes to Lincoln in 2020, and they hope to have a booth there, too.

But for now, they keep mixing and flavoring and dishing out the sweet treat.

Nelson is vice-president of her school’s FFA chapter, is on the speech team and is a member of the National Honor Society. She is the daughter of Devon Nelson and Kelby Nelson.

The Nebraska High School Finals Rodeo will be held in Hastings at the Adams Co. Fairgrounds June 13-15. The rodeo is held at 10 am and 6 pm on Thurs., June 13 and Fri., June 14, with the finals at 1 pm on June 15. Tickets are $7 for everyone ages five and up and are available through the office and at the gate. For more information, visit AdamsCountyFairgrounds.com or hsrodeo-nebraska.com, or call 402.462.3247.