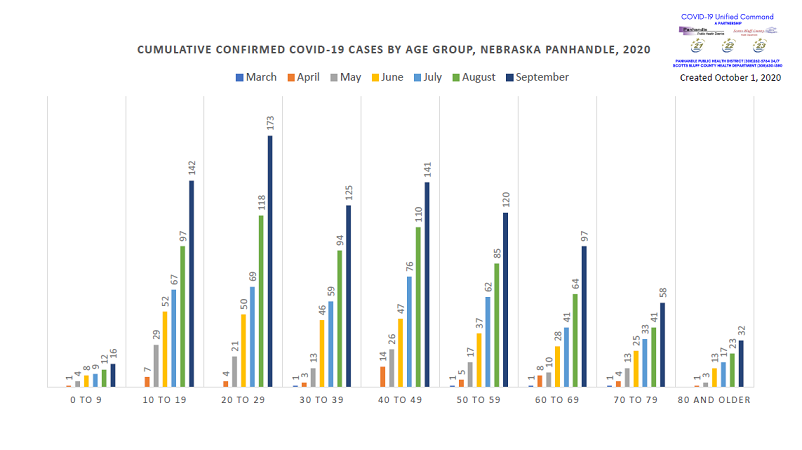 The director of the Panhandle Public Health District says the trend of positive COVID-19 cases in the region recently has been troubling, with the numbers approximately doubling across nearly every age group in September compared to a couple of months ago.

The first chart shows that most age groups have doubled cases when comparing the months of July to September. The second chart shows a gradual stair step increase with the 20-29 age group being the highest followed by the 10-19 and 40-49 age groups.

“These numbers continue to go up, and we all know that means for every person that gets it, probably a couple more are going to be exposed, and that’s what we’re fighting,” said Engel. “Hospitalization across Nebraska is going up, so we’re not out of the woods. We all need to be alert and do the best we can.”

In addition, age breakdowns by month since March were shared for Scotts Bluff, Cheyenne, Dawes, Sheridan, and Box Butte counties. Scotts Bluff County is a gradual stair step increase while Cheyenne County also shows a gradual increase but a more rapid increase from August to September. Dawes County shows very small case counts through July with marked increases in August and September which was a similar trend for Sheridan County. Box Butte County shows very small case counts with a gradual uptick in August leading into a marked increase in September.

Engel said while the marked rise in cases may appear to coincide with the return of students in the classroom, which would be some of the larger daily gatherings in each community, transmission in the schools does not appear to be a driving factor in the overall trend. “What’s happening in the community, and what’s happening at the school is representative of each other in all of these cases,” said Engel. “Definitely September has taken a jump, especially evident in those counties that had very few cases prior to September.”

The move to Phase 4 Directed Health Measures in the middle of that month, which removed the potential misdemeanor penalty from most of the restrictions, appears to coincide with the marked increase. “I heard a lot of people say as we went into Phase 4, ‘Okay, there are no restrictions now’. And we tried to get the messaging out there are still restrictions, and a lot of them are upon us personally. But that (increasing cases) definitely is part of the relaxing of the DHM.”

Unified Command confirms 47 more cases of COVID in the Panhandle since last reporting on Monday, September 28, 40 adults and 7 in the 19 or younger category, and 34 recoveries.

Out of 14,762 tests conducted since March, 916 have come back positive, for an overall positivity rate of 6.2%. 813 have recovered, with 94 currently active cases, three of them hospitalized.

In all, 86 Panhandle residents have been hospitalized with the illness, with deaths remaining at 9.