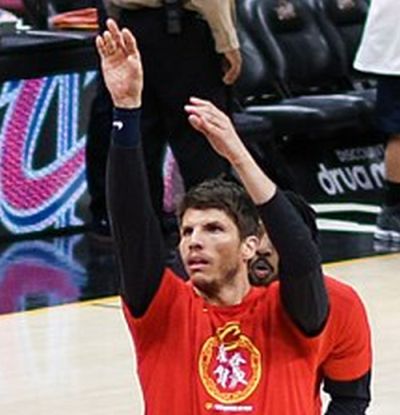 Courtesy/Wikipedia. Korver warming up with Cleveland in 2018.

Creighton’s president, the Rev. Daniel Hendrickson, announced Thursday that Kyle Korver will speak at both May 18 ceremonies scheduled by the Jesuit college in Omaha.

Kerrey decided last month not to address graduates and their families, saying he didn’t want his support for abortion rights to be a distraction. The state Republican Party’s executive director, Ryan Hamilton, had said Creighton should find a different speaker and “take a stand for their pro-life values.”

Korver has played for several National Basketball Association teams, finishing the past season with the Utah Jazz. He graduated from Creighton in 2003.