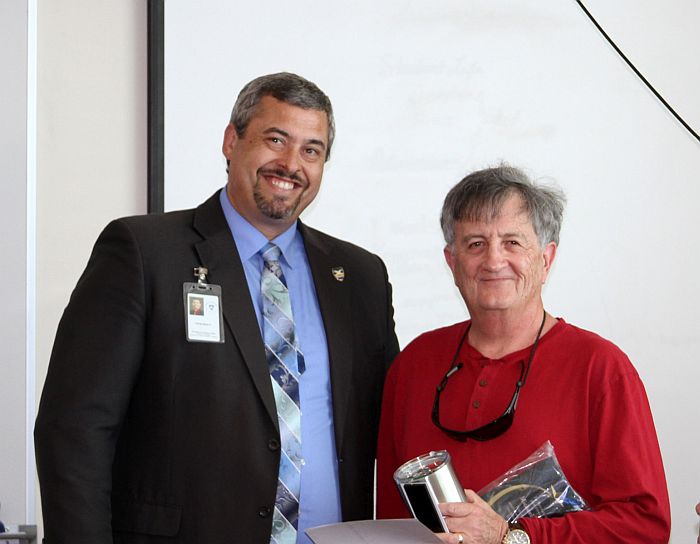 A lifelong resident of Southwest Nebraska will be honored with the 2019 President’s Award from McCook Community College this week.

Dr. Mike Owens will be recognized Friday during MCC’s commencement ceremony for his service to the college and the community as a whole.

A Benkelman native, Owens graduated from Benkelman High School in 1968. He then spent a year at Chadron State College before transferring to the University of Nebraska–Lincoln where he obtained bachelor’s degrees in botany and chemistry.

“After that, I decided I wanted to get a master’s degree in biochemistry,” Owens said. “But, I needed to eat, so I got a part time job at the university’s dental school compiling statistics for the professors’ research.”

A year into the job, a couple of professors in the pediatric dentistry department, began encouraging Owens to apply to dental school. He initially pushed aside the thought because he was just about to finish his master’s degree. Ultimately, it was his wife, Candy, who convinced him to take the Dental Admission Test.

“I passed, and the rest is history,” Mike said.

Mike earned his dental degree in 1979 and moved back to Southwest Nebraska at the urging of Dr. Harlo “Mac” McKinty, a former McCook dentist, who had been teaching at the dental college.

“I also had an offer for a job in Arizona at that time, but my wife and I chose McCook because it was close to home and a good place to raise kids,” Mike said.

He went to work at Dr. Ray Langfeldt’s dental clinic, then opened his own practice a few years later at 521 Norris Ave. Mike remained there for 39 years – until his retirement last summer.

“I always told my patients that McCook Community College is a good place to go to school,” Mike said. “Success starts here. I paid the banks for a long time, and it wasn’t easy. MCC is more affordable than a four-year college or university, and the education is just as good if not better because of the one-on-one instruction. You can’t beat MCC. You can’t beat Mid-Plains.”

That passion for the college was what led him to join the MCC College Foundation in 1987.

“At that time, the school was going through some growing pains,” Mike said. “The college’s accrediting body had told the college to centralize its administration, which was a big move because a lot of people thought the authority for McCook would be diluted and that McCook’s role in the Mid-Plains system would be more like that of a satellite location.”

MCC was the first two-year college in Nebraska, and Mike and other foundation members wanted to make sure it stayed prominent in the system. They also wanted to see it grow and prosper, and they launched a beautification program to help make that happen.

“When I moved to town, the campus was bare,” Mike said. “There weren’t many trees, so we got trees donated and had them planted all over. Then I was given the go-ahead to put a sitting area on the north side of McMillen Hall. After that, we bought lights from the city and put them down the center of the campus, lining the sidewalks. We must have moved those lights three or four times before we were done.”

As a business owner, himself, Mike was keenly aware of the importance of creating a welcoming environment.

“First impressions are important,” Mike said. “If you have a nice welcome mat out for people, it will attract them to your business, and the college is a business. It needs to attract people. That’s how I always looked at it.”

Mike left the foundation 2010, but didn’t completely leave his work with the college behind. He joined the Mid-Plains Community College Board of Governors in 2011 at the urging of former board member Elizabeth Benjamin.

One of his favorite projects while on the board was the creation of the Peter and Dolores Graff Events Center in 2012.

“An event center was in the back of everyone’s minds from the time I moved to McCook,” Mike said. “Looking back, that’s probably why I got on the board in the first place. McCook has always been a hub for Southwest Nebraska, and an event center was a definite need. It has really improved the college and the community.”

Another proud moment Mike had as a board member was the hiring of current president Ryan Purdy.

“Hiring Ryan was one of the best decisions we ever made,” Mike said. “McCook Community College is very important to the growth of this area, and I’m happy to see the emphasis that Ryan and his colleagues have put on it. He has been a good influence, and I think the school is definitely moving in the right direction.”

Mike served eight years on the board of governors – until December of 2018.

It couldn’t be more fitting then that Mike will receive the President’s Award in the same building he helped to establish, the Graff Events Center, surrounded by the board members he served with.

The commencement ceremony is open to the public. It will begin at 10 a.m.