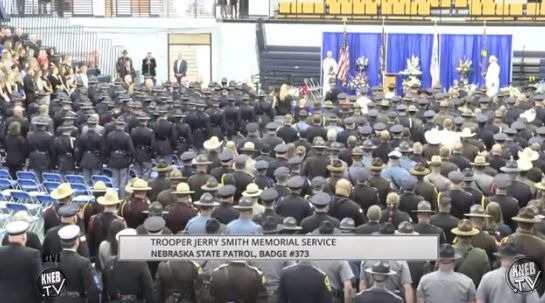 Scottsbluff, Neb. — More than 300 people, including Gov. Pete Ricketts and law enforcement officers from around the country, attended the funeral of a Nebraska state trooper killed in a crash in western Nebraska.

The funeral Thursday for 51-year-old Trooper Jerry Smith was held in Western Nebraska Community College’s gym in Scottsbluff, a week after he died in a crash on Highway 26 in western Nebraska that also killed a 28-year-old man.

Smith, who had a lengthy career in the military that included being awarded a Bronze Star Medal, joined the patrol at age 47. He was believed to be the oldest person to complete the patrol’s Basic Recruit Camp.

Smith is survived by his wife of more than 30 years and two adult children.