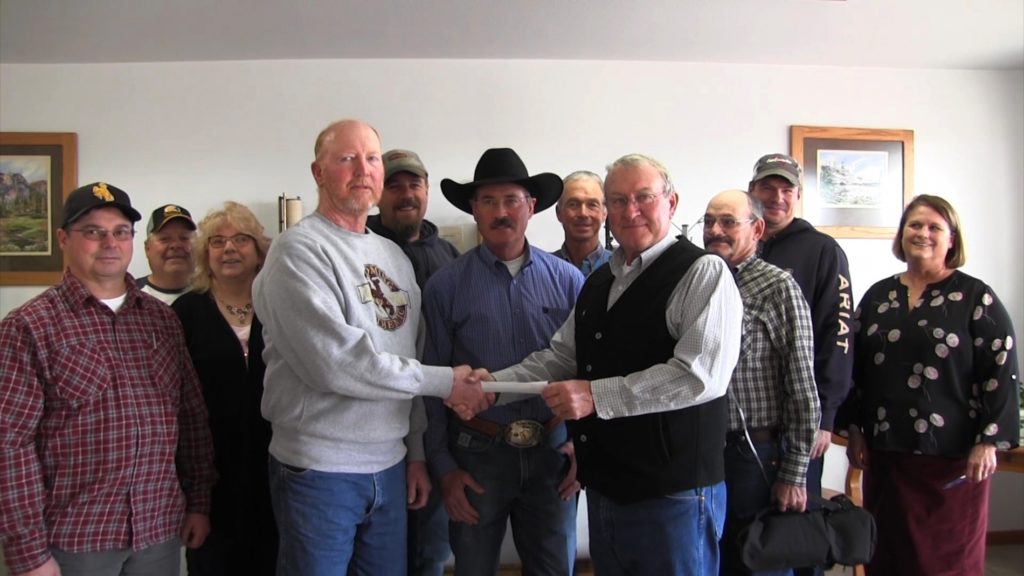 The Goshen Irrigation District (GID) received a large donation of $131,210 on Tuesday, Nov. 5, from the Art & Pat Damrow Trust in Torrington Wyo.

The donation will help in offsetting the irrigation assessment fees for the GID landowners.

“We had to raise the assessments $5 per acre, and this gift pays half of that so of the additional $5 assessment this covers $2.50 of that for the upcoming tax season. So, this is a huge benefit to the landowners and irrigators,” said Shawn Booth, secretary-treasurer of the GID board.

The Damrow board of trustees decided on the donation to the GID, since Art Damrow was involved in production agriculture in the area as a young man, and well into his 100s.

“He started out in the potato industry, and he did pretty well, and like everything in commodities, it crashed. Art spent his whole like finding things that worked in the market and was involved in every aspect of agriculture from potatoes to corn and livestock,” said Hugh Hegeman, a member of the board of trustees.

Each landowner has been affected differently by the collapse of the Ft. Laramie Canal, which occurred on July 17, 2019.

Many of the producers in Goshen County, Wyo. grow alfalfa, corn, sugar beets, and dry edible beans. While the alfalfa producers were able to get a couple of cuttings before the collapse, the other crops were not so fortunate.

“The unfortunate thing was the time of the year when everyone had put in their inputs or about 90 percent invested in the crop. All they needed was water, and it was water we didn’t have for about six weeks,” said Ted Bentley, trustee for the Damrow Trust.

The check was presented at the Goshen Irrigation District Board meeting.

The Gering Ft. Laramie Irrigation District Board will also meet this week, and then the two boards will meet to decide on the repair of the canal, and the way to move forward for next year’s irrigation season.