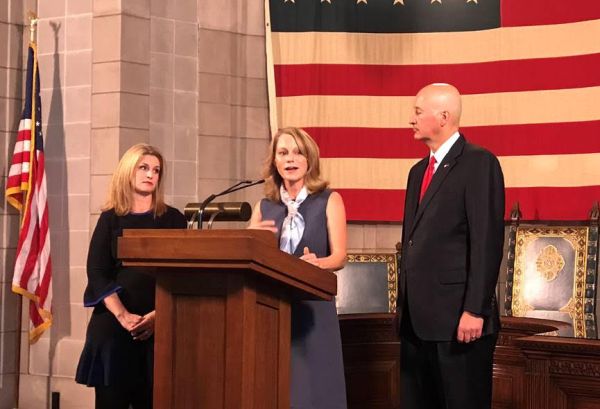 Nebraska: It Happens Here showcases pioneering young Nebraskans who are successfully chasing their dreams in the Cornhusker State. The high-impact video series will feature entrepreneurs, artists, musicians, non-profit leaders, legislators, and other young Nebraskans making a difference in their communities. The overarching goal of the video series is to spur economic development, convince Nebraska graduates to start their careers in-state, and to recruit talented workers to Nebraska.

“Growth is happening here in Nebraska, and much of it has been fueled by the dreams, determination, and grit of young leaders,” said Gov. Ricketts. “These young Nebraskans have chosen the Good Life because of Nebraska’s family-oriented culture, affordability, and abundant economic opportunities. Nebraska Impact has done tremendous work to spotlight their successes and to tell how they have put down roots in the Cornhusker State.”

Each young leader will be featured in 3-5 videos. The videos will be tailored for a number of social media sites, including Facebook, Twitter, Instagram, YouTube, and LinkedIn. The videos will also be available online at www.ithappensherenebraska.com.

“Whether the people being featured have lived in Nebraska all their lives, have returned after living in another state, or made the decision to start a new life here, each has a compelling, inspiring story that will resonate with audiences,” said First Lady Shore. “The underlying message of the project is: if you can dream it, you can do it in Nebraska.”

V2 Content, the same award-winning team that created the Now You Know Nebraska videos for the Nebraska150 Celebration, is producing the privately funded videos.

“While our brand has changed, our mission of bridging communities, connecting Nebraskans with one another, and enhancing state pride remains the same,” said Nebraska Impact Executive Director Regan Anson. “There is a real sense of momentum across the state that Nebraska Impact is in a unique position to capitalize on. We intend to continue our efforts to implement new, innovative statewide programming that can foster economic development, address workforce shortages, encourage volunteerism, and respond to natural disasters.”

Nebraska Impact currently has two other initiatives underway: Nebraska Volunteers and Nebraska Responds. Nebraska Volunteers was created for the Nebraska150 Celebration with the goal of increasing volunteer engagement in the state by serving as a tool to connect users with volunteer opportunities in their area. Nebraska Responds is a web-based platform that will serve as a centralized resource to share information about disaster relief resources and coordinate unaffiliated disaster-related volunteer efforts. The site will launch in 2020.

Additional information about Nebraska Impact and its programs is available at www.neimpact.org.

Watch video of the Nebraska: It Happens Here news conference by clicking here