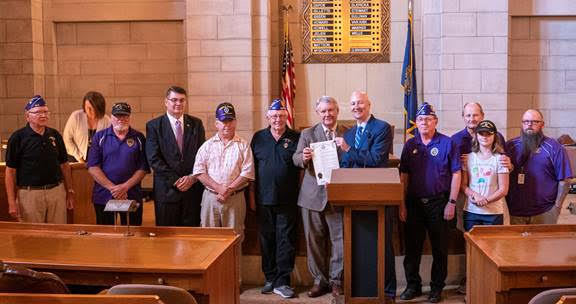 LINCOLN – Today, Governor Pete Ricketts welcomed recipients of the Purple Heart to the State Capitol for a proclamation signing ceremony.  At the event, the Governor declared August 7th as Purple Heart Day in Nebraska.

“The freedoms we enjoy have been secured by the courageous sacrifices of generations of Americans,” said Gov. Ricketts.  “It’s fitting that we honor the Purple Heart veterans in our midst and cherish the memory of the many heroes who are no longer with us.”

August 7th is Purple Heart Day each year in the United States.  It recognizes soldiers who were wounded in combat and received the medal.  It also honors soldiers killed in action who posthumously received a Purple Heart, accepted by their family.

“We take time today to honor America’s combat wounded as well as those who have paid the ultimate sacrifice and never returned home,” said Nebraska Department of Veterans’ Affairs (NDVA) Director John Hilgert.  “Today we recognize and honor those who have received that distinction, but every day we will be grateful for their sacrifice.”

This evening, the State Capitol will be lit in purple to commemorate Purple Heart Day.