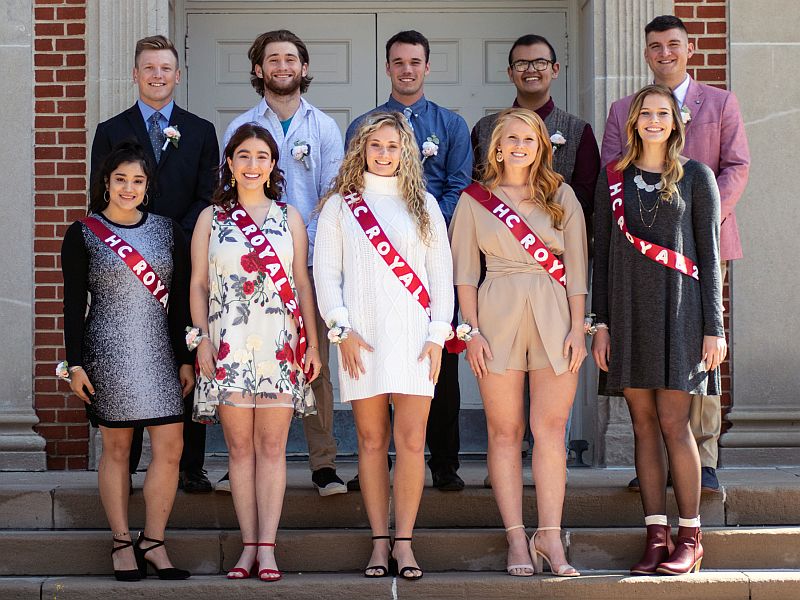 (Hastings, Nebraska) – Homecoming week is underway at Hastings College, with traditional student events happening daily. Activities include everything from bed races to a chalk walk and a bonfire to skit night. Along with the excitement of these homecoming activities, 10 royalty finalists were chosen from the junior class.

The 2019 Homecoming King, Queen, Prince and Princess will be announced Friday, October 11, 2019, at Kiewit Gymnasium during the annual Homecoming dinner.

Brief bios of all candidates finalists are below.

Hastings College 2019 Queen Candidate Finalists
Joelle Derner of St. Paul, Nebraska is the daughter of Douglas and Rene Derner. Majoring in business, she also serves as a resident assistant and a peer connector.

Maggie Rogers of Birmingham, Alabama is the daughter of Tim and Kathy Rogers. While still deciding her major, she serves many committees on campus and is the vice president of the Student Association, an active student in the Honors Program, a tour guide and a member of the Fire Circle.

Lucy Skoch of Hastings, Nebraska, is majoring in elementary and special education. The daughter of Dr. Michael and Ginny Skoch, she is a member of the volleyball team and was named first team all conference last year. She is also involved in BroncoCatholics, Alpha Chi academics honorary and Student Education Association.

Claire Thede of St. Paul, Nebraska, is majoring in accounting and business administration and is the daughter of Michael and Jean Thede. She plays on the volleyball team as well as serving as a resident assistant and a peer connector.

Socorro Topete of South Sioux City, Iowa, is the daughter of Sandra Solis. Majoring in criminology with a sociology emphasis, she is the head resident assistant for community organizing at Bronco Village. Additionally, she serves as the Diversity Team student representative, an inclusion center student representative and a senator for Student Association. She is also active in theatre and the sociology club.

Hastings College 2019 King Candidate Finalists
Jordan Ismaiel of Hastings, Nebraska, is the son of Sam and Sheryl Ismaiel and is majoring in studio art, philosophy and religion. He is an active member in the Honors Program, the Collegian newspaper staff, the Hastings College Lecture Series Student Symposium and the Kappa Pi Art Honorary. A JDAC gallery assistant, he belongs to the Society of Collegiate Journalists, the Diversity Team and Diversity Book Club.

Carter Mason of Eden Prairie, Minnesota, is a business marketing major and is the son of Jim and Kathy Mason. He is an active player on the men’s tennis team and the Student Athlete Advisory Committee (SAAC). The dean’s list student was named the GPAC Men’s Tennis Player of the Year in 2019.

Jayden Miller of Gothenburg, Nebraska, is the son of Travis and Heather Miller. He is a K-12 physical education major and an active member of the wrestling team. He is involved with SAAC and is a Student Association senator.

Ethan Molifua of Lincoln, Nebraska, is majoring in elementary education and is the son of Danette Molifua and the late Nielson Molifua. He is a member of Student Education Association, serves as a resident assistant and is a state executive member for the Student Association of Nebraska.

Vinny Schmidt of Hastings, Nebraska, is the son of Mark and Stephanie Schmidt and is a biology major. The dean’s list student is a member of the baseball team, earning first team all conference honors, and serves on the Welcome Home Committee.