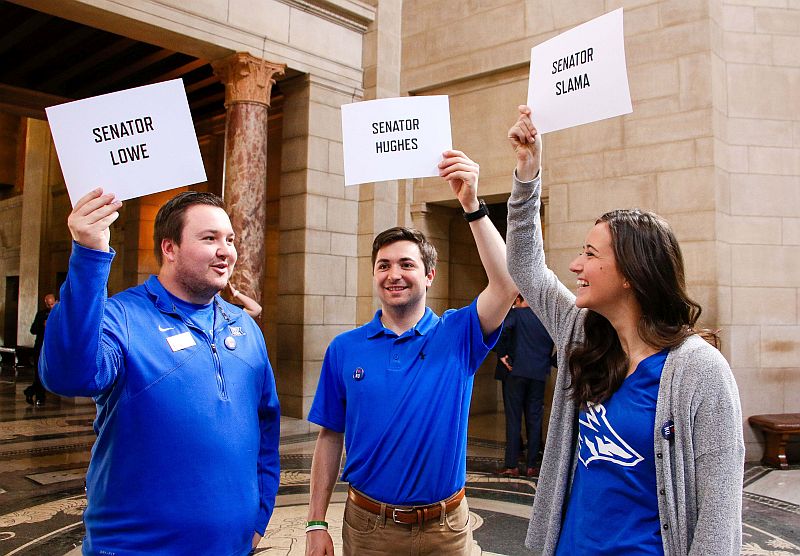 From left, UNK students Taylor and Trey Janicek of Bridgeport and Nicole Kent of Benkelman wait for state senators to enter the Capitol Rotunda during “I Love NU Advocacy Day” in Lincoln. Wednesday’s event gave University of Nebraska supporters an opportunity to meet with lawmakers, share their stories and discuss the university system’s impact on the state. (Photo by Amanda Andresen, UNK Communications)

“It’s the responsibility of those of us sitting across the hall to create the infrastructure and the environment to grow our state,” Sen. Matt Williams of Broken Bow said while addressing the crowd. “And education is the No. 1 investment we can make.”

The state senator’s message – adequate funding for higher education is essential to move the state forward – reverberated throughout the morning as University of Nebraska supporters came together for the second annual “I Love NU Advocacy Day.”

“The state of Nebraska is in need of workers, and the university is one of the solutions to that problem,” said Martonia Gaskill, an assistant professor of teacher education at UNK.

Gaskill, who earned a master’s degree from UNK as an exchange student from Brazil, understands the influence an in-state education can have on students.

“I came back to UNK because it’s a great place to be,” she said.

The University of Nebraska boasts an enrollment of nearly 52,000 students across its four campuses and the Nebraska College of Technical Agriculture in Curtis, including students from all 93 Nebraska counties, all 50 states and more than 100 countries. NU, which has a $4.5 billion annual economic impact on the state, already produces 11,000 graduates each year, but more are needed to meet workforce demands.

“Growing up in a rural area where there’s a shortage of physicians, I know how important this issue is,” said UNK junior Nicole Kent, who is student body president and UNK’s student representative on the University of Nebraska Board of Regents.

A native of Benkelman, Kent wants to serve fellow rural Nebraskans after graduating from medical school.

Her father, who is superintendent of Dundy County Stratton Schools, and brother both hold multiple degrees from UNK, where she is studying biology with a health sciences emphasis.

“UNK is my home,” she said. “It’s a place where I’ve grown so much, where I’ve had so many blessings and opportunities come my way. Without adequate funding from the state, without advocacy from the public and students, UNK wouldn’t be where it is.”

“We need funding to be a high-quality, lower-cost institution that serves first-generation students and students from all sorts of different backgrounds,” Kent added.

Kent and other UNK students shared their stories with state senators during “I Love NU Advocacy Day” and asked them to back the university system during budget talks.

“The more stories we can tell and the more people we can get on board, the harder we are to ignore,” Kent said.

“UNK is very important to my district,” said Lowe, who represents Kearney and the rest of Buffalo County.

With around 1,100 faculty and staff, the university is among the area’s largest employers, and its more than 6,000 students are a ready-made talent pool for central Nebraska businesses.

“I view the university as a great tool for businesses to hire from,” said Lowe, a UNK graduate. “ … Businesses need people, and they need people who have been trained and are ready to do things. The university is able to provide that.”

Although Lowe said he hasn’t studied NU’s budget request, it has been discussed by the Legislature’s Appropriations Committee.

After multiple budget cuts over the past two years and the implementation of $22 million in annual reductions through efficiencies identified by budget response teams, the university system is requesting increases in state funding of 3 percent for 2019-20 and 3.7 percent for 2020-21. Those increases would cover basic operational costs, with further reductions and a possible tuition increase needed to address other core needs.

Senior Taylor Janicek, whose parents are Loper alumni, said it’s important to keep tuition affordable at UNK, where nearly 45 percent of undergraduate students are the first in their family to attend college.

The Bridgeport native called UNK a “gateway to rural Nebraska” that provides opportunities for many small-town students.

“If we want our budget to support the growth we want, we need to plead our case,” Janicek said.

Kent wants University of Nebraska graduates across the state to think about future generations and the education they’ll need.

“They wouldn’t be where they are without our university system being as great as it is,” she said.