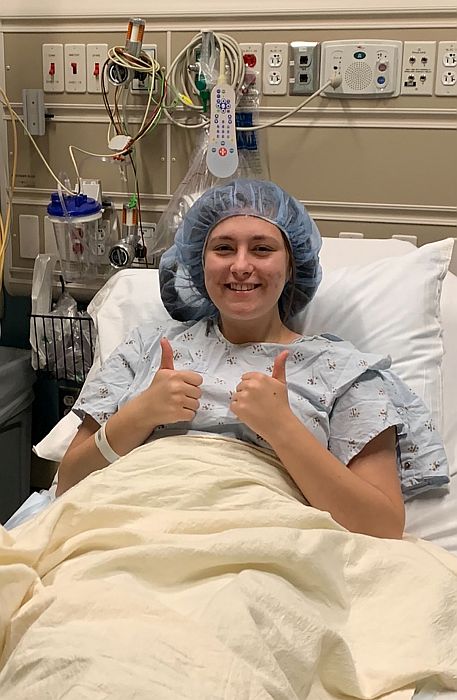 Autumn Ickler, a junior at UNK, poses for a photo at the Fred and Pamela Buffett Cancer Center in Omaha shortly before her Jan. 21 surgery. Ickler donated bone marrow to a 54-year-old woman battling acute myeloid leukemia. (Courtesy photo)

KEARNEY – Autumn Ickler doesn’t know the woman’s name or where she lives.

As of now, they’re complete strangers.

But that didn’t matter in early December, when the University of Nebraska at Kearney student received a potentially lifesaving phone call that will forever connect the two.

Ickler was training for her new job at Mosaic, a faith-based organization serving people with intellectual disabilities, when her cellphone rang. She didn’t answer the unknown number, assuming it was a telemarketer.

Then came a text. It was a representative from Be The Match, a registry operated by the National Marrow Donor Program.

She took the next call.

Now a junior studying criminal justice with a psychology minor, Ickler was a freshman when she signed up for the bone marrow registry. She and her boyfriend, fellow UNK student Trenton Cadwallader, were understandably reluctant when they were approached inside the Nebraskan Student Union.

The couple didn’t know anything about donating bone marrow.

Two years after that seemingly forgettable cheek swab, Ickler was about to make one of the most important decisions of her young life.

Her stem cells were a likely match for a 54-year-old woman with acute myeloid leukemia, a rapidly progressing cancer of the blood and bone marrow.

By donating her marrow, the voice on the other end of the phone explained, Ickler could save this stranger’s life.

The 20-year-old knew what she had to do.

“My fears kind of went away because I knew God had picked me for this,” she said.

‘IT WAS ALL WORTH IT’

Ickler, a member of UNK’s Nebraskats show choir, and Cadwallader, a Stanton native who competes on the Loper men’s track and field and cross country teams, were preparing for a vacation in Spokane, Washington, when the match was confirmed.

“I got the phone call literally as I was boarding the plane saying I needed to continue the process,” she said.

After they arrived in Spokane, Be The Match paid for a roundtrip flight to Omaha so Ickler could undergo a physical exam at the Fred and Pamela Buffett Cancer Center to ensure she was healthy enough to donate. After a whirlwind 48 hours, she was back in Washington to finish her vacation.

Two weeks later, Ickler returned to the Buffett Cancer Center for her surgery. During the 2 1/2-hour procedure, more than a liter of marrow – the spongy tissue where blood cells are made – was removed from her hip bones.

Although it’s typically an outpatient procedure, allowing donors to leave the hospital the same day with only soreness and fatigue, Ickler experienced some negative side effects when her blood pressure and hemoglobin level dropped. She was released from the cancer center the following day, Jan. 22, and ended up in the emergency room at the hospital in her hometown of Plainview. Ickler spent three days at CHI Health Plainview and received a blood transfusion before returning to Kearney last week.

Despite the setbacks, Ickler isn’t second-guessing her decision to donate, calling it “the best experience I’ve ever had.”

In fact, one of her first questions after the process was, “When can I donate again?”

“If you’ve never seen cancer suck the life out of someone you’re close to, then you probably won’t understand it as much as someone who has,” she said. “Go spend a day in the Buffett Cancer Center and you’ll want to donate your bone marrow. To give someone’s life back to them, to give someone’s mother back, their daughter, their son, their father, that family will forever thank you.

“No matter the pain I went through, it was all worth it and I would do it all over again in a heartbeat.”

Ickler knows that mystery woman battling acute myeloid leukemia received her bone marrow, but she hasn’t heard anything else since.

Privacy rules prevent them from learning more about each other for at least a year.

“I can’t wait to meet her when I get the chance,” Ickler said.

The UNK student was allowed to send a letter on the day of her donation, letting the 54-year-old know there’s another person out there who’s praying for her.

Ickler encourages others to sign up for the Be The Match registry, just like she did as a freshman.

You never know who’s waiting for the same phone call she received.

“By putting your name on that list, yes, you’re potentially saving a life, but you’re also giving a family hope,” Ickler said. “That’s the biggest thing, giving people hope and being kind.

“This process taught me how to love a stranger.”