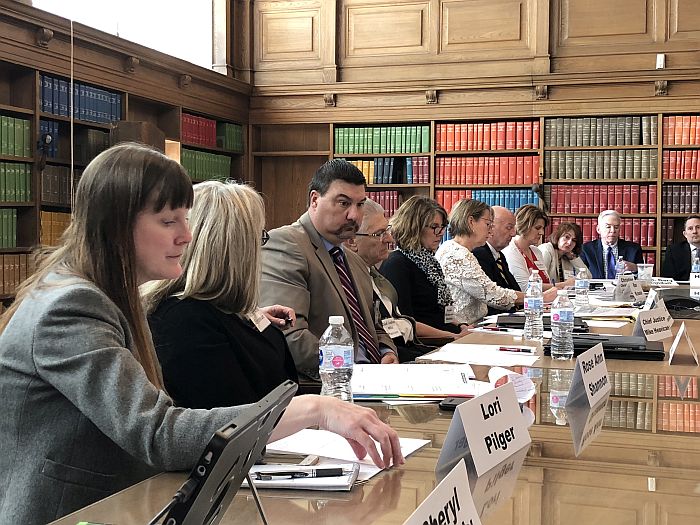 Courtesy/ Members of the Bench Media Committee of the Nebraska State Bar Foundation at work in April 2019 at a meeting in the Nebraska Capitol.

Lincoln, Neb. (November 13, 2019) – Nebraska Bar-Press Guidelines, written almost 50 years ago, will be reviewed by a committee of the Nebraska State Bar Foundation to see if they need to be revised or if they remain relevant in today’s news environment.

Nebraska Supreme Court Justice Jeffrey Funke said work will begin in 2020 on a thorough review and update, if necessary, of the Nebraska Bar-Press Guidelines. The Bar Foundation’s Bench Media Committee will focus on this action item, he said.

The Guidelines are voluntary and reflect standards that Nebraska lawyers and news media representatives believe are a reasonable means to accommodate the right of free speech and free press and the right of an accused to a fair trial. They can be found on the State of Nebraska Judicial Branch website at  https://supremecourt.nebraska.gov/media/reporter_guide/guidelines.

In announcing the need for review, Justice Funke noted the original Guidelines were issued in June 1970 and have stood the test of time on a philosophical level. “The Guidelines have functioned well for the past 50 years, but technology has gotten ahead of both journalists and courts,” he said. The work group undertaking the review includes working journalists from print and broadcast, judges and attorneys from a wide range of law practice areas.

“Our committee hopes to have revised Guidelines before the 50-year anniversary of Nebraska’s inaugural set of Guidelines,” Justice Funke said.

The original Guidelines called for “continued joint efforts” between Nebraska lawyers and the news media to resolve any areas of differences “that may arise in their mutual objective of assuring to all Americans both the correlative constitutional rights to freedom of speech and press and to a fair trial.”