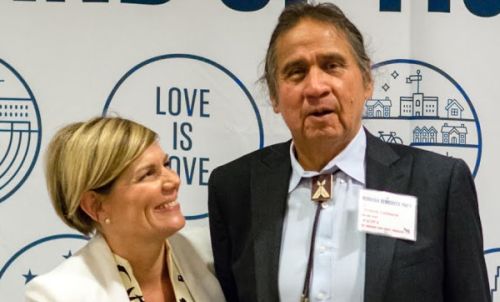 Native American activist Frank LaMere, who fought for a variety of causes and crusaded to close beer stores near a dry South Dakota Indian reservation, has died at 69.

LaMere, who was a Winnebago Tribe of Nebraska member, worked for decades to close the four stores in Whiteclay, Nebraska, that sold millions of cans of beer near the Pine Ridge Indian Reservation. Regulators shuttered the stores in 2017.

LaMere also spoke out against the proposed Keystone XL and Dakota Access pipelines.  He also was a prominent critic of the Omaha Police Department’s handling of Zachary BearHeels, a mentally ill Native American man who died in 2017 after officers punched and shocked him with a Taser.

LaMere served on the Democratic National Committee from 1996 through 2009 and was a state delegate for multiple conventions, working his way up to vice chairman of the state party.

But Judi Gaiashkibos with the Nebraska Commission on Indian Affairs says LaMere also had a talent for connecting with people regardless of their views. He was a member of the American Indian Movement.