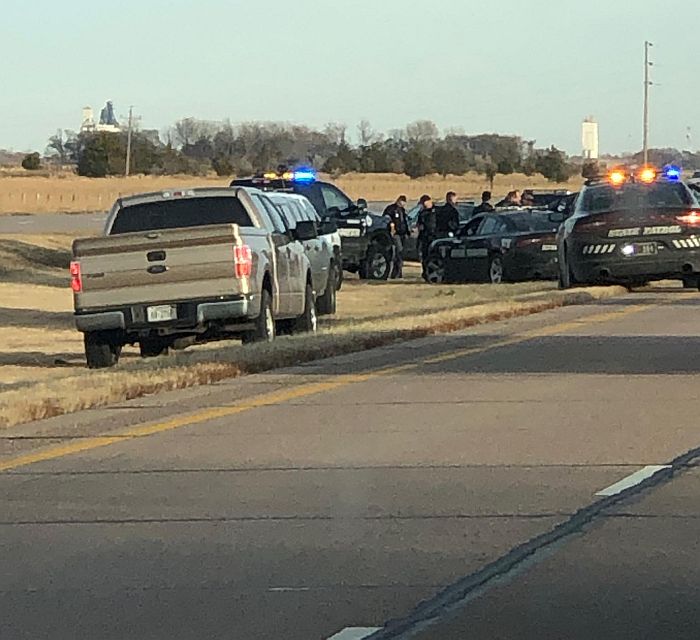 Courtesy/ Amy Biehl-Owens. Traffic was halted on Interstate 80 Tuesday afternoon November 5, 2019 between Gothenburg and Brady as law enforcement attempted to take a motorist into custody.

NOVEMBER 5, 2019 (NORTH PLATTE, NEB.)  — Troopers with the Nebraska State Patrol (NSP) were able to bring a low-speed pursuit to a safe conclusion this afternoon near Gothenburg on Interstate 80.

At approximately 3:00 p.m. Tuesday, a trooper observed a Chevrolet Suburban traveling eastbound at about 30 miles per hour near mile marker 190 on I-80. The trooper attempted a traffic stop. The vehicle stopped momentarily, but then continued driving at around 30 to 35 miles per hour.

Troopers pursued the vehicle, attempting to get the driver to stop or exit I-80. As the vehicle continued eastbound, troopers successfully deployed spike strips near mile marker 207. A trooper was then able to perform a tactical vehicle intervention to bring the Suburban to a stop in the median.

Troopers were then able to take the driver into custody and discovered that the driver was possibly experiencing a mental episode. The driver was placed in emergency protective custody.

Interstate 80 was closed for both eastbound and westbound traffic for approximately 45 minutes while troopers responded to the scene. The Dawson County Sheriff’s Office and Nebraska Department of Transportation assisted with traffic control during this incident.