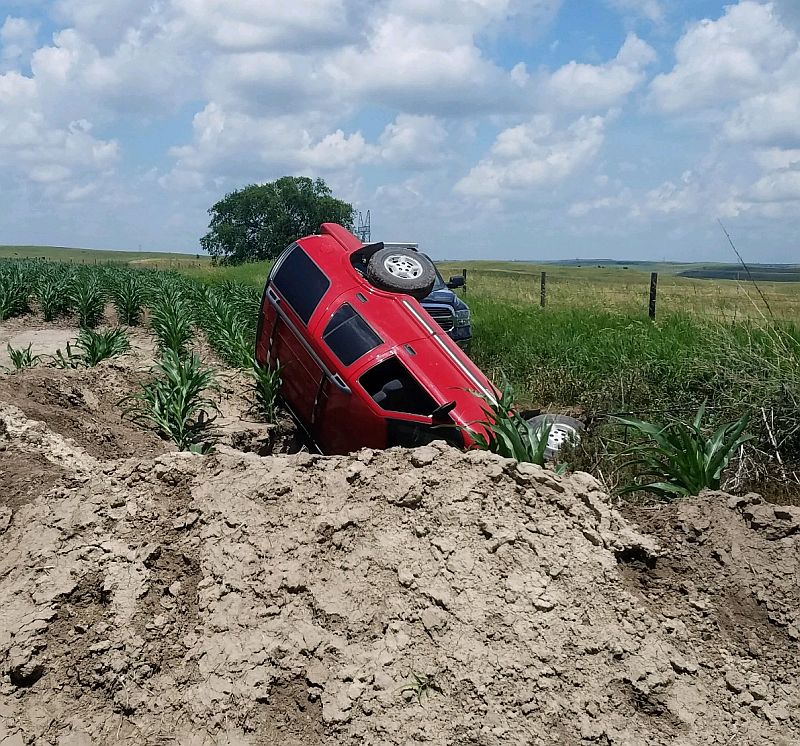 A rural Callaway man was rescued early Wednesday afternoon after being reported missing earlier in the day. Custer County Sheriff’s Sgt. Barrett Gibbons said they were contacted around 10:20am Wednesday by a person who was concerned about a family member that hadn’t been home that morning. The Dawson County Sheriff’s Office and Nebraska State Patrol assisted in the search for the 81-year-old man’s vehicle in northwest Dawson and southwest Custer counties.

A Custer County Sheriff’s deputy followed a roadway into a cornfield and found some vehicle tracks and followed them around a cornfield then located the SUV on the edge of the cornfield in a washout. It was a little more than 15 miles northwest of Cozad just inside the Custer County line. Sgt. Gibbons said the man “drove into it and the vehicle tipped forward inside the hole”, pinning the vehicle against the other side of the washout. The subject exited the vehicle and then slid down and became trapped underneath the vehicle with the vehicle suspended above him. Sgt. Gibbons estimated the depth to be about 10 feet and described the sidebank as being too high to crawl out of it.

Cozad Fire & Rescue was summoned at 1:11pm to assist the rescue. Cozad Fire & Rescue member Brian Woldt says upon arrival at the scene, they dropped a ladder into the hole and a rescue member crawled in and helped secure the patient who was conscious and alert. The patient was assisted up the ladder, placed onto a backboard and then secured onto a utility vehicle on-loan to the Fire and Rescue. Rescuers then walked alongside the utility vehicle through rough terrain to a Good Samaritan Aire Care helicopter that arrived at the scene. Sgt. Gibbons says the man was flown to CHI Health Good Samaritan in Kearney. The utility vehicle played a significant role in the rescue as Woldt declared “it paid for itself today”.

Authorities believe the man had been trapped since late Tuesday afternoon or early Tuesday evening.