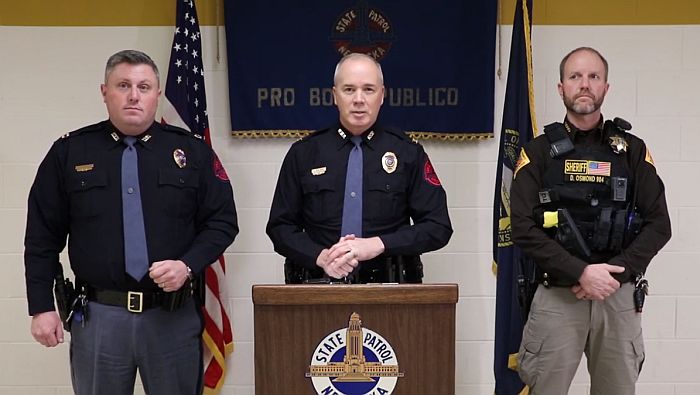 Nebraska State Patrol and Custer County Sheriff’s Office held a press conference in North Platte Tuesday on details related to stand-off in northwest Custer County the day before that led to the death of a 28-year-old rural Broken Bow resident. Court records says the Custer County Sheriff’s Office was summoned to an equipment building at at a rural residence around 3:30am Monday. A family member reported that Print Zutavern had threatened to harm himself and had shot some bucket calves. The deputy attempted to contact Zutavern by phone several times but, the calls went unanswered.

At the press conference, State Patrol Cap. Tyler Schmidt said troopers were called to assist the Sheriff’s Office deputies on the scene shortly after 6:00am Monday. The scene was located about 15 miles north of Arnold on Dunning Road. The State Patrol also responded with support from their air wing division, service dogs, robot and armored vehicle to try to “bring a peaceful end to this situation”. NSP negotiators began communicating with Zutavern. Cap. Schmidt said Zutavern had reportedly threatened his father with a firearm and had shot and killed several animals. Negotiators maintained communications throughout the day and a warrant was obtained for Zutavern’s arrest. The charges included Possession of a Firearm by a Prohibited Person, Use of a Weapon to Commit a Felony, two counts of Terroristic Threats and two counts of intentional Cruelty of an Animal.

Around 6:11pm, Cap. Schmidt says Zutavern attempted to leave the property on an utility terrain vehicle but, was “blocked my multiple troopers prior to entering the Dunning roadway. He was given loud, verbal commands to put his hands up”. Zutavern refused to removed his hand from a pocket while approaching a trooper on foot and Schmidt says the trooper discharged his duty weapon. Troopers and emergency medical technicians, who were staged on scene, began life saving efforts immediately. Zutavern was transported to Great Plains Health in North Platte where he succumbed to his injuries. A shotgun was recovered in the UTV and no law enforcement were injured.

Custer County Sheriff Dan Osmond described it as “a very difficult situation. It was not one that we took lightly at all”. He continued that “every effort was made to try and end this peacefully and unfortunately it did not end up that way”. Sheriff Osmond says family members were at the scene but, were able to leave.

NSP Col. John Bolduc commented that “a great deal of effort and planning and restraint went into this operation to try to prevent loss of life. Unfortunately the circumstances tuned out otherwise”.

All three law officers expressed their condolences to the family and shared their thoughts and prayers to everyone involved in the operation including law enforcement, first responders and communication specialists.

Per State Patrol policy, Cap. Schmidt says the trooper has been placed on administrative leave pending an internal agency review. The Custer County Attorney has directed an investigation with investigators from the State Patrol’s Troop C division in Grand Island. Custer County resides in the State Patrol’s Troop D Division which is headquartered in North Platte. A grand jury will be convened, in accordance with state law, whenever someone dies in custody or in the process of being taken into custody.

Due to the ongoing investigation, the name of the trooper involved was not released along with other details.