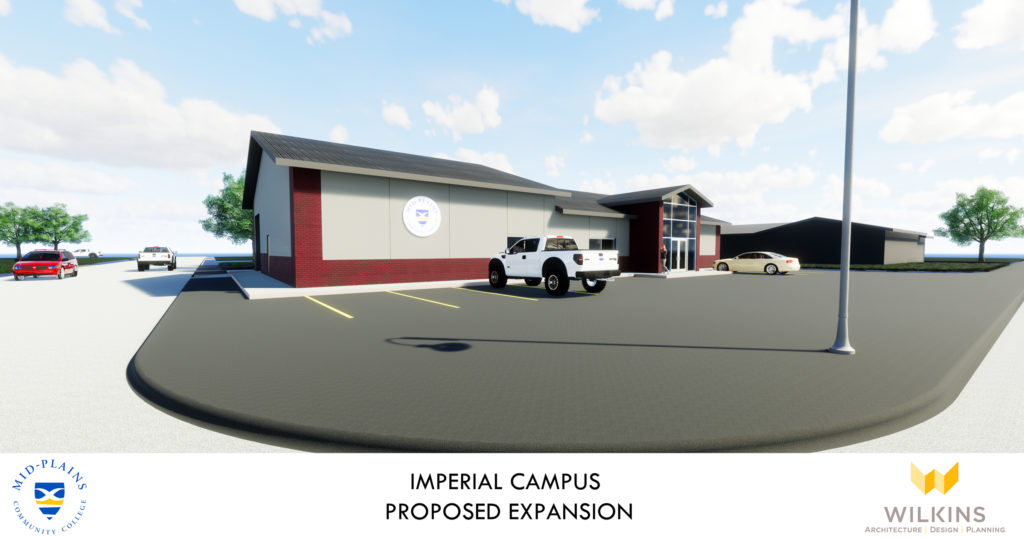 MPCC/An architect’s rendering shows what the MPCC Imperial Campus will look like after the facility is expanded.

Mid-Plains Community College will expand its campus in Imperial to better meet the needs of students, businesses and industries in the southwest corner of its service area. Enough funds have been raised to begin the project – possibly as early as this spring.

“The Imperial Community Campus expansion project will have a significant impact on the quality of life for residents of Imperial and the Chase County area,” said Bonnie Kruse, MPCC director of institutional advancement. “Now more than ever, the nation is looking to its community colleges to build a workforce that can strengthen local, state and national economies. With increased capacity, the Imperial Community Campus will provide expanded workforce training while serving as a source for rural economic stabilization to keep the region vital and strong.”

The MPCC Imperial Campus started out as a classroom and office in the Business Plaza in 2004 – in response to a growing need for higher education opportunities in Southwest Nebraska. The space was outgrown by 2008, so the college purchased and renovated the Hometown Pharmacy building at 1324 Broadway, the site of the current campus. It opened with a ribbon cutting in July of 2009.

Since that time, the campus has provided the Chase County region with both traditional and non-traditional classes, business and targeted industry trainings and a variety of avocational and recreational courses.

Increased partnerships with local businesses and industries have resulted in a need for additional space to accommodate enhanced workforce training, state-of-the-art mobile training equipment and advancements in distance learning technology.

The Imperial Campus has also experienced an upward trend in full-time enrollment over the past five years – from 22.7 percent during the 2014-15 academic year to 33.6 percent in 2018-19.

“The Imperial Community Campus has been maximized and used to its fullest potential,” Kruse said. “By expanding the existing facility, the Imperial Community Campus will be able to provide space for additional enrollment in nursing, CPR and Emergency Medical Services. Not only will there be more class space for general education/transfer courses, but also a multi-purpose room for on-site, applied technology courses and hands-on learning opportunities.”

According to Brenda Ledall, Imperial Campus administrator, those opportunities could include everything from meetings and business trainings to children’s classes and community education workshops.

As someone who has watched the evolution of the Imperial Campus from the very beginning, Ledall couldn’t be more excited about this next step.

“It has been such a privilege to work with the Southwest Nebraska area and all the students past and present as they progress on their educational journeys,” said Brenda Ledall, Imperial Campus administrator. “We began serving them with one classroom, expanded to three and, once again, are outgrowing our space. What a great problem to have – so much demand that we have to grow. I can’t wait for what the future holds.”

The approximately 2,500-square-foot addition will be constructed on the north end of the current facility. Two new classrooms and the multi-purpose room will be added there, as will new restrooms, a mechanical room and a storage room.

At the same time, the south end of the building will be remodeled to include a simulation lab, which will be outfitted thanks to in-kind equipment donations from Chase County Community Hospital.

In addition to MPCC’s contribution toward the $925,000 cost of the project, funding came from the City of Imperial, the Chase County Board of Commissioners, donations from several local businesses and organizations and the William and Ruth Scott Family Foundation, of Omaha.

The project will go to bid at the end of this year. The goal is to start construction in the spring of 2020 and complete the project by the summer of 2021.