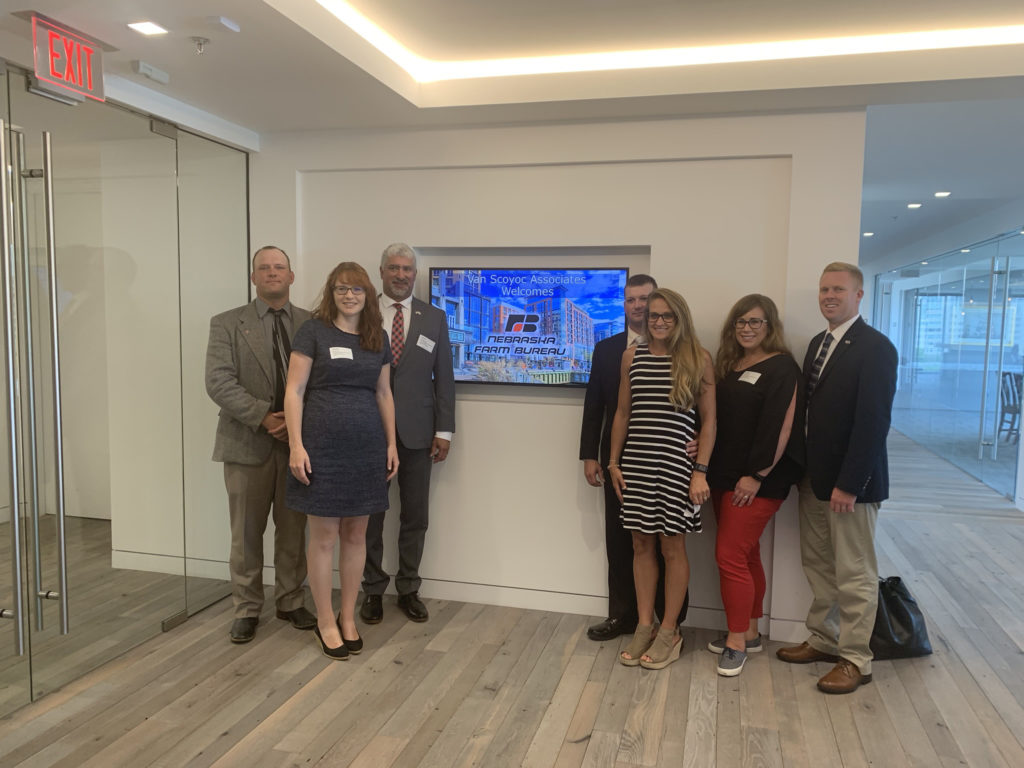 Nebraska Farm Bureau young farmer and rancher leaders visited the Plant Based Foods Association during their National Affairs visit to Washington D.C. July 15-17. Pictured from left are Luke and Erin Norman, Northwest Region representatives on the YF&R Committee from Dawes County; Mark McHargue, first vice president of Nebraska Farm Bureau of Merrick County; Jason and Karah Perdue, chairs of the YF&R Committee from York County, and Krystal and Lance Atwater of Adams County. Lance Atwater serves as the youth at-large member on the NEFB board of directors.

LINCOLN, NEB. –During a national affairs trip to Washington, D.C., members of Nebraska Farm Bureau’s (NEFB) Young Farmers and Ranchers (YF&R) Committee asked for more economic stability and pushed for the passage of the new U.S.-Mexico-Canada Agreement (USMCA) this fall.

The passage of the new USMCA remains a top priority for Nebraska Farm Bureau. Lance Atwater, who farms near Ayr and serves as youth at-large on the NEFB board of directors, asked Nebraska’s congressional delegation to take up and pass the new agreement quickly to provide a level of certainty for Nebraska’s farm and ranch families.

“In 2017, Nebraska sold $979 million of major agriculture commodities to Canada and $889 million to Mexico. We must ensure free and open access with two of our largest trading partners and closest allies. We need to create stability for younger producers,” Atwater said.

Improving trade rations with China was also a heavily discussed topic during the national affairs visit. Chairs of the Nebraska Farm Bureau’s Young Farmers and Ranchers Committee, Jason and Karah Perdue, raise grain and livestock near York and also serve as South Central representatives on the YF&R Committee. Lack of access to the Chinese market has already imposed clear economic strain to Nebraska’s agricultural and overall economy.

“In 2017, Nebraska sold $937 million of Nebraska commodities to China. We need good outcomes to current negotiations with China, Japan, and the European Union,” Jason Perdue said.

Nebraska Farm Bureau leaders also talked about rural broadband and how important it is to farmers and ranchers and their bottom lines. Luke and Erin Norman are ranchers near Crawford, Nebraska in Dawes County. Internet connection in rural areas is sketchy at best.

“Farmers and ranchers depend on broadband just as they do highways, railways, and waterways, to ship food, fuel, and fiber across the country and around the world. Current and future generations of rural Nebraskans are being left behind because they are without affordable high-speed internet service. We asked our congressional delegation to support a bill called the Broadband Data Improvement Act of 2019,” Luke Norman said.

“While the list of challenges young farmers and ranchers face is long, the need for young people in agriculture to answer the call of growing food for our nation and world remains as strong as ever. Continuing to communicate our message to key decision makers is vital to the future success of our farm and ranch families,” McHargue said.

Those attending the National Affairs visit were: