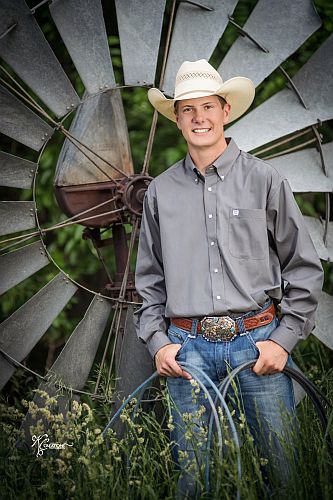 Ord’s Sage Konicek went through three surgeries to correct a dislocated elbow. His medical issues have inspired him to be an orthopedic surgeon. The Nebraska high school rodeo cowboy has been awarded an RHOP scholarship and will attend Chadron State College this fall. Photo courtesy KC Creations.

The Ord, Neb. man, a 2019 graduate of Burwell High School and a member of the Nebraska High School Rodeo Association, has been granted the RHOP, which pays for the student’s tuition at a Nebraska college and guarantees acceptance to the University of Nebraska Medical Center. He will attend Chadron State College this fall.

3Konicek, a tie-down roper, team roper, and competitor in the boys cutting, became interested in the medical field after a freak accident his freshman year.

During a high school football game in the fall of 2015, he dislocated his elbow. He and his parents didn’t think too much of the injury. He competed in two high school rodeos that weekend before going to the doctor for surgery.

Surgery didn’t fix the problem; so he had a second surgery.

After the second surgery, Konicek’s right arm still wasn’t right. He was unable to extend it, he couldn’t blow his nose with both hands, couldn’t button the top button on his shirt, and couldn’t brush his teeth with that arm.

The doctor told him nothing could be done about it; he’d have to live with the way it was.

He and his parents were devastated. “It was tough,” he remembers. “I was sitting there, thinking, this is how I’ll be for the rest of my life. It was tough on my parents, too.”

The right-hander adapted, learning how to shoot a basketball left-handed. He became more ambidextrous, using his left arm for more things.

1It was a recommendation from his grandpa that made him and his parents switch doctors. They went to a doctor in Norfolk who “gave us some hope,” Konicek said.

So after state basketball in March of 2017, at which Burwell played, Konicek was back in surgery for a third time.

The doctor cleaned out scar tissue and bone spurs, among other corrections, and this time, it worked.

The arm isn’t one hundred percent, but it’s close to it, and Konicek is able to do everything he could do before the dislocation.

The ordeal with the arm has motivated him to study orthopedic surgery. “It’s ironic, how it all worked out,” he said. “Without the injury happening, I don’t know if I’d be pursuing this field of study.” He knows he can make a difference as an orthopedic surgeon. “It inspired me,” he said. “I learned from my doctor in Norfolk how much you can change someone’s life. He was the one who inspired me to go into the medical field.”

After Konicek’s graduation from UNMC, he’ll be required to work in the medical field in rural Nebraska for a minimum of three years, as part of the RHOP stipulations. RHOP is designed to address the special needs of rural Nebraska by encouraging rural residents to pursue a career in the health care fields.

At Burwell High School, Konicek was involved in FFA, speech, quiz bowl, football, basketball, rodeo club, was a class officer, a member of the National Honor Society, and on the All-A Honor Roll.

He is the 2018 Nebraska State High School Rodeo Boys Cutting champion, and competed at the state finals in Hastings his freshman and junior years and is on track to qualify this year. He qualified his sophomore year but did not compete due to the elbow injury.

The Nebraska High School Finals Rodeo will be held in Hastings at the Adams Co. Fairgrounds June 13-15. The rodeo is held at 10 am and 6 pm on Thurs., June 13 and Fri., June 14, with the finals at 1 pm on June 15. Tickets are $7 for everyone ages five and up and are available through the office and at the gate. For more information, visit AdamsCountyFairgrounds.com or hsrodeo-nebraska.com, or call 402.462.3247.