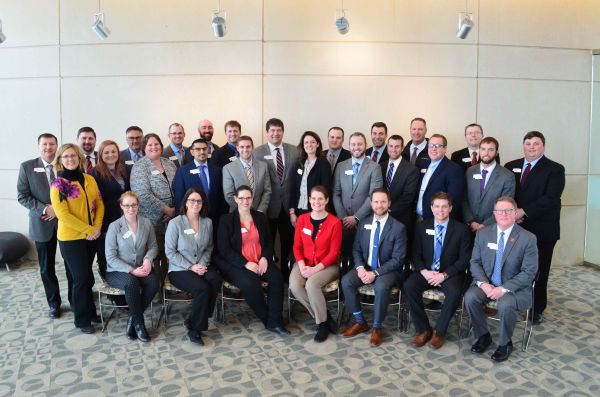 During their three hours on campus, the group toured the Fred & Pamela Buffett Cancer Center and a research lab in the Durham Research Center and received an overview of some of the key elements that comprise the medical center. An imminent snowstorm caused the LEAD Fellows to have to cut their visit to UNMC short.

The Nebraska LEAD Program began 37 years ago to develop agricultural leaders from Nebraska’s future generations. The constant changes that occur in agricultural policy, marketing, economics and technology point to the need for strong leaders to advocate for the heart of Nebraska’s economy – agriculture.

The program is recognized both statewide and nationally as an innovative organization that has improved Nebraska in many ways. For example, many members of commodity boards, extension boards, local school boards, or local church councils, count themselves among the programs more than 1,000 alumni.

“We always love to come UNMC,” Hejny said. “We consider the medical center to be one of the most important resources for the state, and our LEAD Fellows always leave with a great appreciation of the tremendous work being done there.”

The LEAD Fellows are either ag producers or engaged in other agribusiness activities. Listed below by hometown are the LEAD Fellows (Class 37) who visited UNMC: