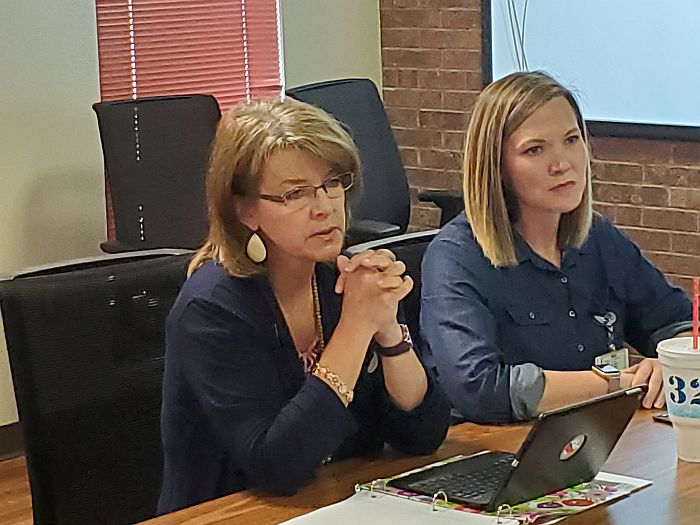 RRN/ Pam Trampe(left) began her term on the Lexington Regional Health Center Board of Directors on Monday. Board Vice-Chairperson Amber Ackerson is seated to the right.

Pam Trampe was administered the oath of office Tuesday as a member of the Lexington Regional Health Center Board of Directors during their monthly meeting. Trampe was appointed by the Board last month to fill the unexpired term of Tara Naprstek. Naprstek stepped down earlier this year to accept the position of Director of Finance with the Health Center.

The Board also conducted election of officers for the coming year. All were reelected with Rob Anderson as Chairperson, Amber Ackerson as Vice-Chairperson and Tucker Case continuing as Secretary-Treasurer. The fifth member of the Board is Ken Harbison.

Board members and staff congratulated Chief Medical Officer Dr. Fran Carlson on her recognition over the weekend with the University of Nebraska Medical Center’s Alumni of the Year Award. Dr. Carlson responded that the award was something she never expected to receive. Chairman Anderson commented that the award was “well deserved”.

Dr. Carlson reported on medical students who are taking their rotations at the Health Center. One physician just concluded her rotation. Another physician and a physician assistant will be started rotations in early July.

Chief Nursing Officer Nicole Thorell informed the Board of the hiring of Micala Dempcy as Director of Obstetrics. Dempcy has already started. She was previously a labor and delivery nurse in Columbus and has certifications as a lactation consultant and childbirth educator.

Chief Executive officer reported that Chief Operating Officer Jim Hain will be decreasing his hours as he prepares for eventual retirement.

A reminder was noted that Urgent Care will be located in the same building as the Family Medicine Specialists clinic on July 1st.

The next meeting was scheduled for July 30th at noon in the Health Center board room.