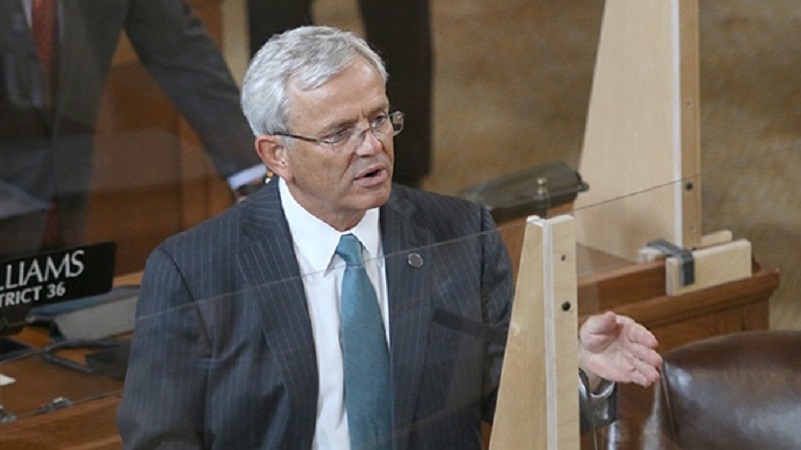 Tempers flared Tuesday at the Nebraska Legislature during debate on a bill changing parole-eligibility dates after one senator concerned with the lack of progress on property tax reform offered more than 25 one-line amendments.

Senator Steve Lathrop of Omaha, sponsor of LB 1004, was visibly upset with the tactic, saying it’s ridiculous and the legislature is not functioning. “This bill has the support of law enforcement, it has the support of the prosecutors. You can do what you want, but Jesus Christ! You can come over and tell me if you have a problem with it,” yelled Lathrop. “This is stupid and we’re not functioning! And by the way, I’ve spent about the last three months working on property tax relief.”

LB 1004 seeks to address the overcrowding crisis in Nebraska’s correctional system by automatically making committed offenders eligible for parole within two years of their mandatory discharge date, unless they are eligible for parole at an earlier date.

The surprise stall tactic by Sen. Andrew La Grone drew a furious response from the bill’s sponsor, Sen. Steve Lathrop. La Grone, a Republican, says he won’t support the measure until lawmakers approve a bill to lower property taxes. He launched a filibuster against the bill, at one point reading from the children’s book “Yertle the Turtle and Other Stories” to consume time.

Bayard Senator Steve Erdman noted that last year, Lathrop was not above using filibuster tactics, and recalled some advice passed on by Omaha Senator Ernie Chambers that lawmakers should not get attached to their legislation. “When you stopped my (agland) valuation bill from advancing, I didn’t throw a temper tantrum, I didn’t slap the podium, I didn’t use the Lord’s name in vain, and I didn’t do that to get support from some people in the body, like you did, ” said Erdman. “Senator Chambers wastes time, that’s his perogative and he can do that. So if the rest of us want to waste time, it’s in the same category as what Sen. Chambers does. Deal with it.”

Senator Andrew LaGrone ultimately withdrew his 28 amendments to the bill after receiving assurances that property tax relief would be addressed before the end of the session.

Following additional discussion of the bill, it passed the first round of debate on a vote of 29-2, with 16 members not voting.